The proponents of negative interest rates argue that they are nothing more than a natural extension of conventional monetary policy. By lowering real interest rates, the cost of credit will fall, leading households and corporates to increase their debt to fund increased consumption and investment. This amounts to an increase in demand which will, in turn, push inflation higher.

Reversing this logic, the reason inflation is falling short of central-bank targets is seen to be a deficiency of aggregate demand, which is a function of households and businesses saving too much. Lower the real interest rate, policymakers contend, and households and corporates will be incentivised to reduce saving and borrow more.

Having identified deficient demand as the cause of the continued weak economic recovery and persistent deflationary pressures, central banks have found themselves in somewhat of a quandary. With policy rates already slashed to near-zero, and inflation continuing steadily to decline, real interest rates were increasing – precisely the opposite of what authorities wanted. This is how a number of central banks have justified cutting policy rates into negative territory.

The Bank of Japan, European Central Bank (ECB), Riksbank in Sweden, Swiss National Bank and Danmarks Nationalbank have all implemented negative interest rates, in effect charging banks for holding reserves on deposit with them. The expectation is that, rather than incur the cost of negative rates, banks will reduce the amount of reserves they hold with their central bank, thereby increasing the supply of funds available to the real economy. These reserves have been rising over the last year, as the chart below (showing eurozone banks’ reserves with the ECB) illustrates.

Applying the principles of supply and demand, this increase in the supply of funds will see interest rates move lower as banks court additional demand for credit from households and corporates. 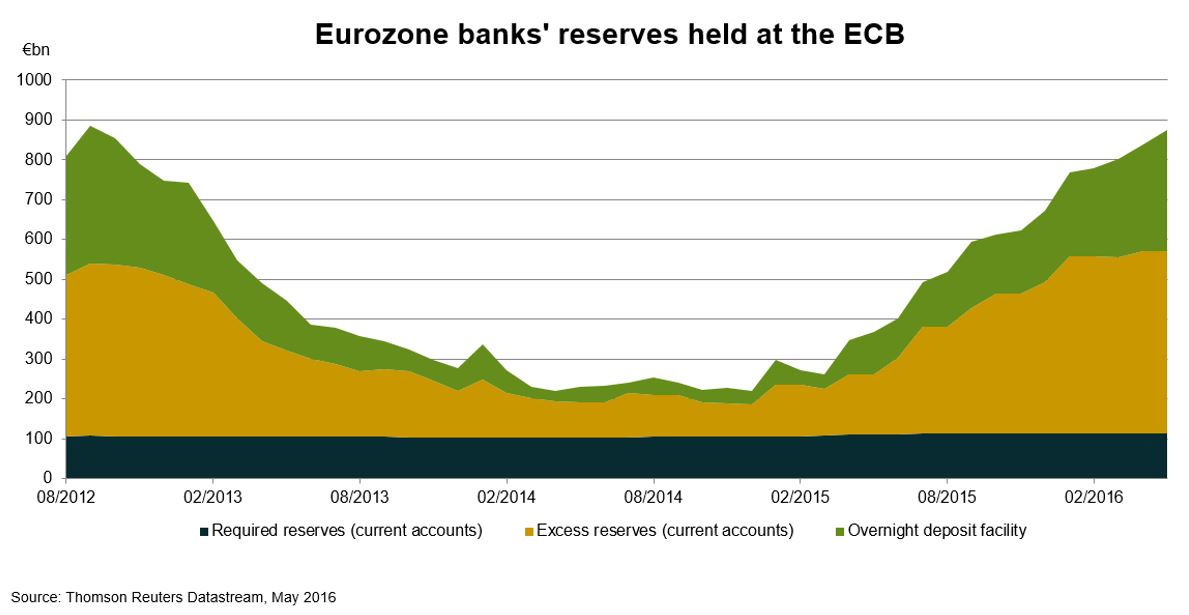 Negative policy rates, alongside central-bank bond purchases, have undoubtedly led to lower yields, which in isolation represent a one-off loosening of financial conditions. However, contrary to central-bank dogma, we believe negative interest rates are likely to lead to a sustained tightening of financial conditions owing to the detrimental impact they have on bank profitability.

Negative interest rates have led to further declines in the rates banks are able to charge on loans, while at the same time banks have been unable to pass the cost of negative interest rates on to household depositors. Already in Japan, sales of safes and demand for ¥10,000 notes have risen as Japanese households look to the benefits of putting money ‘under the mattress’: http://www.bloomberg.com/news/articles/2016-02-24/tucking-10-000-yen-bills-under-the-mattress-spells-worry-for-abe

Historically, banks have passed lower interest rates onto depositors, but so far negative policy rates have not been applied to household deposits. Not only would this be politically toxic, it would also serve as a powerful incentive for households to withdraw their deposits, and thereby erode banks’ funding base. As a result, net interest margins have been eroded. Increasing earnings pressure limits banks’ capital-generation capacity and their ability to make provisions against what we see as the inevitable future losses that will occur when economies weaken and debtors find themselves subject to financial stress.

With profitability declining, and the threat of interest rates being cut further into negative territory, banks have little confidence that they will be able to generate profits sufficient to absorb future losses, so their willingness to extend credit is declining. Negative rates, then, have the unintended consequence of impairing a bank’s willingness to supply credit to economic participants.

Alternatively, assume that a bank responds to negative interest rates as the central banks intend it to. The bank seeks to avoid incurring the negative interest rate by reducing reserves with the central bank and supplying more credit to the economy. This would be at rates of interest that the bank would have deemed too low in the absence of negative rates, thus earning a net interest margin that was previously considered insufficient to compensate for the risk of the loan. This depresses the bank’s return on equity and weakens its balance sheet. In turn, the bank faces an increased cost of capital, reflected in a lower share price, which, again, will impair the ability of the bank to extend credit.

This conundrum has been seen, for example, in the performance of Japanese bank share prices since the Bank of Japan announced in January that it would adopt negative interest rates. 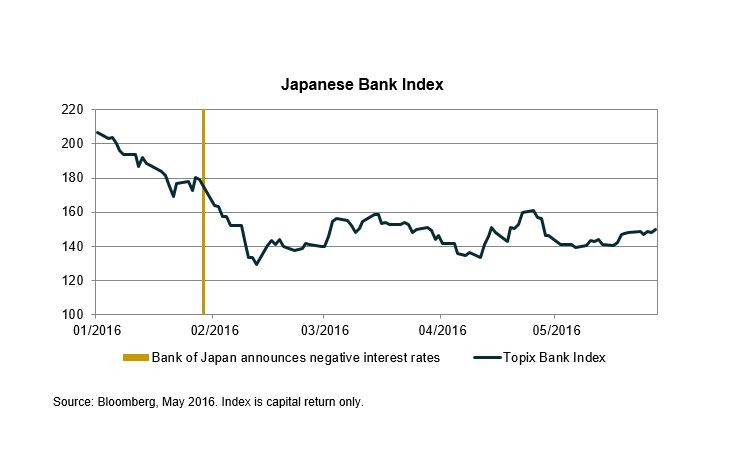 Negative interest rates are already affecting the regulatory landscape, with Germany’s banking supervisor introducing additional capital requirements for German banks. This is intended directly to address the increased risk that lower core profitability poses to the banks, particularly Germany’s smaller financial institutions which are more heavily dependent on the type of traditional lending-based activities which are being challenged in a prolonged low interest-rate environment. By being compelled to hold additional capital, banks will accumulate more profit as reserves, at the expense of extending new loans – a clear tightening of credit conditions.

Which came first – the vaccine or the egg?

Out of left yield