As part of our environment and infrastructure themes group we have been considering the divergence in different countries’ carbon policies and attitudes towards cleaner, renewable sources of energy – as well as their direction of travel. 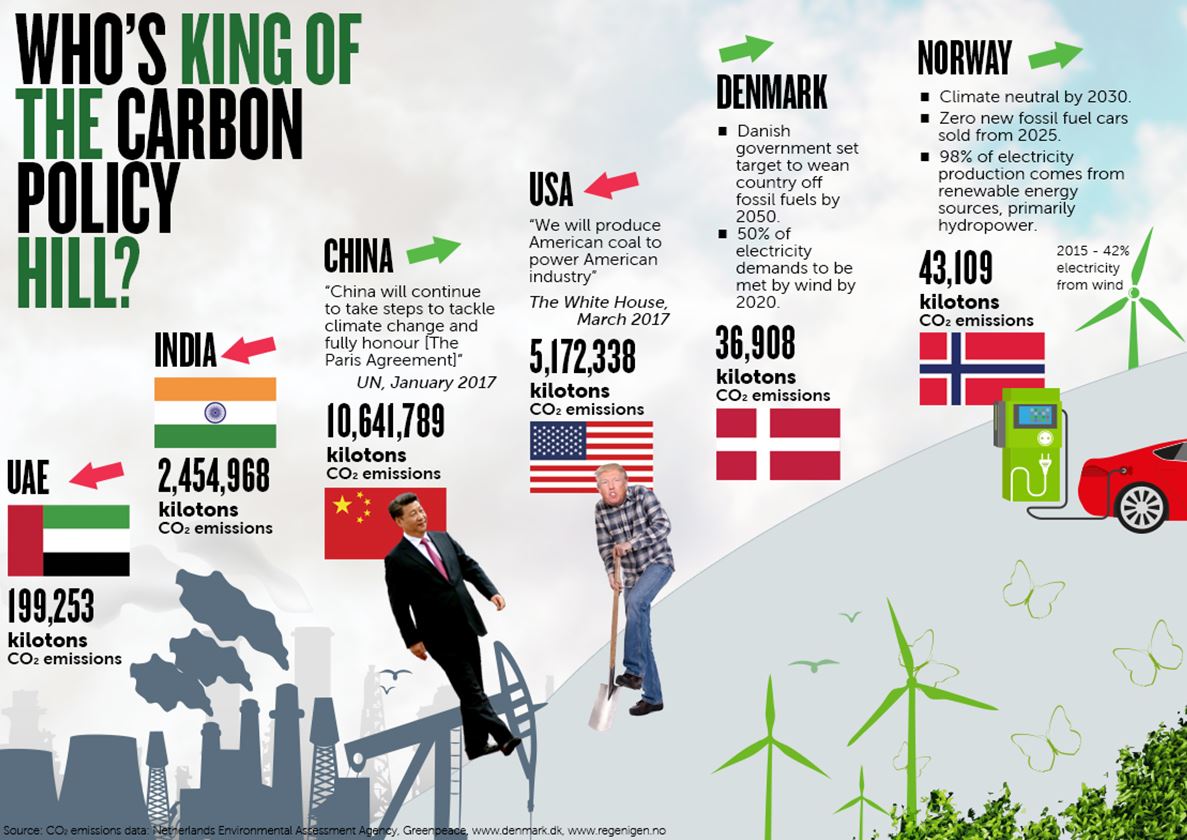 We have put together this infographic, which we think demonstrates our point clearly. While countries such as the UAE (United Arab Emirates) and India remain heavily reliant on fossil fuels, China, traditionally the ‘factory of the world’ and currently the global leader in carbon emissions, is making progress with increased investment in renewable energy.

Solar in particular is an area of focus. China’s National Energy Administration (NEA) reported that the country’s solar energy production more than doubled in 2016, and the NEA’s solar development plan aims to add more than 110 gigawatts of solar energy capacity by 2020 with an investment of around 2.5 trillion yuan (approximately £292 billion).[1]

However, just as China takes steps towards less polluting sources of energy, the US is being led by a climate-change sceptic president.

So far we have seen Mr Trump sign an executive order calling for a review of the Clean Power Plan (or as he put it “eliminate a devastating anti-coal regulation… putting an end to the war on coal”[2]), and, perhaps most controversially, pull his country out of the momentous Paris climate change agreement.

… and the king of clean energy

By contrast, at the top of the hill stands Norway, a shining beacon of progress in the field of carbon policy. The country’s credentials in the area of electric vehicles (EVs) are particularly impressive, and that’s what we’d like to focus on in this post:

– In Q1 of this year, Norway had the highest xEV (vehicles that are solely battery powered or are a combustion engine/battery-powered hybrid) penetration rate in Europe, at 35.27% – far ahead of Sweden, the second highest at 4.26%.[3] 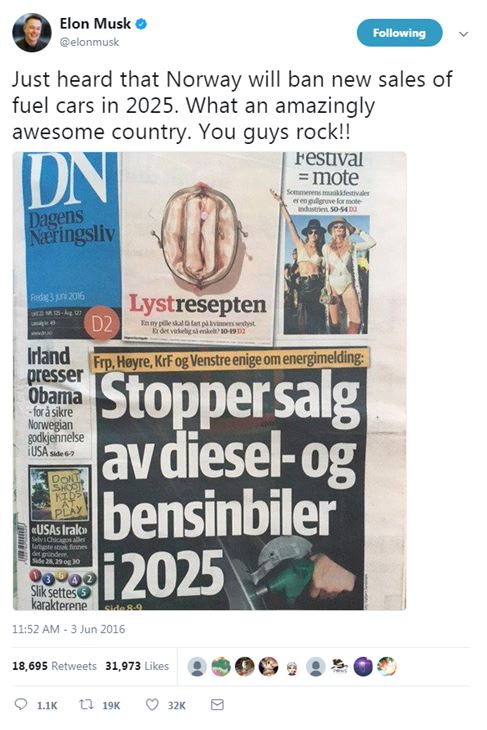 Clearly the country is highly progressive in this area – and we believe Norway is today where Europe will be in terms of EV penetration by 2030.

So what can other countries learn from Norway?

The country has not gone so far as to ban sales of new fossil-fuel cars from 2025, as Elon Musk tweeted; instead, the government has implemented a number of strong policies focused on a tax system designed to make zero-emission cars very attractive.

For example, both battery electric vehicles (BEVs) and plug-in hybrid electric vehicles are exempt from VAT at 25%, while for cars with internal combustion engines, the more emissions emitted, the higher the tax rate applied. That’s not all; xEVs are exempt from road tolls and benefit from parking privileges in many towns and cities, as well as access to bus lanes.[6]

The Norwegian Tax Administration website has a helpful tool which can help you calculate the amount of tax you would need to pay when importing a new vehicle. The table below compares the Audi Q7 3.0 Tdi, which retails for £50,060 in the UK, with the Tesla Model X, selling for £79,000. 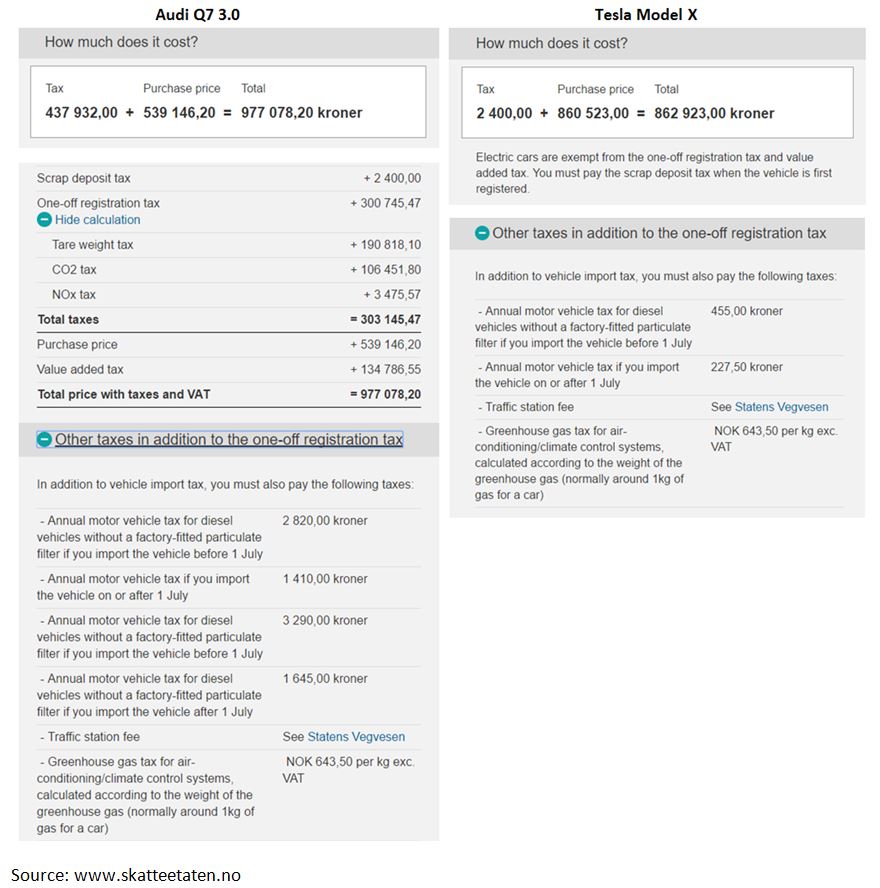 King of the hill… but at what cost?

The Norwegian government is also determined to implement the necessary infrastructure to support the continued increase in EV penetration. The country currently has 1,300 fast-charging stations (offering a charge of 50kW or more, for example CHAdeMO, CCS and Tesla Superchargers),[7] equating to the optimal ratio of 1 station per 100 EVs, according to the Electric Auto Association, and the government plans to maintain this. Companies are taking the initiative too. Ikea, for example, is installing fast chargers at all its stores in Norway.[8]

But adding charging stations is not the biggest cost to the Norwegian government to promote EVs – it is the tax exemption. For example, Italian power company Enel recently announced it would invest €300 million to install 12,000 recharging stations across Italy.[9] This gives a price of €25,000 per station. Assuming a similar price per station implies that it cost Norway roughly €32 million to build its fast-charging network for the 100,000 xEVs currently on the country’s roads. This expense appears relatively cheap when you consider the VAT exemption has probably wiped €800 million off the Norwegian budget, 25 times more than the expense of building the fast-charging station network. This is the real cost of being king of the carbon policy hill.

Mathieu is a global research analyst specialising in the automotive sector.