UK Institutional Blog Posts While you were watching Brexit

It’s impossible to avoid Brexit on the news – every bulletin seems to feature an update on the negotiations or details of key personalities’ latest gaffes. This puts us in real danger of ‘Brexit fatigue’, which leads us to switch off from the news altogether and miss other important releases.

The Bank of England’s (BoE) shift has not occurred solely through the well-flagged interest-rate rise in November. The central bank has also started the process of reversing some smaller mechanisms that have been less talked about.

An example of this is the Term Funding Scheme (TFS), which was introduced in 2012 to encourage lending to smaller businesses and homeowners and is now set to expire. The TFS kept funding costs low, which meant banks could fund themselves more cheaply and in turn enabled lending. It particularly drove down the cost of funding for challenger banks, allowing them to get closer to the costs of large incumbents.

The most direct way of lowering funding costs is to lower interest rates across the board, which of course the BoE did in the aftermath of the financial crisis. However, once it had reached a base rate of 0.5%, it needed another mechanism to boost lending – so it implemented the TFS. Some banks have tried to pre-fund future business as far as possible, so we do not think the impact of the scheme’s removal in February will be felt for another 18 months. After this point, we are expecting to see slower loan growth. The BoE is withdrawing stimulus because it feels the economy is recovering but, as always, it is walking a tightrope. We would argue that, while people focus on the headline base rate level decided by central banks, sometimes seemingly innocuous changes in policy have more of an impact on the real economy, of which this could be a perfect example.

We tend to avoid the retail sector within our UK equity portfolios, and the first quarter of 2018 has reminded us why. On top of the demise of brands such as Toys “R” Us, Maplin and East, countless others have informed investors of plans to close stores and/or to seek help through company voluntary arrangements designed to try and improve lease terms on stores.

During the recession that followed the global financial crisis, there was a swathe of high street casualties; HMV and Woolworths were among the most publicised.

In our view, this time is different. Previously, it was about stores not being able to keep up with debts and suffering the impact of tighter household budgets on shopping habits. Today, we believe it is more of a structural shift – online sales are going up and up, and we believe they are reaching critical levels. Traditional retailers that have not adapted quickly enough to this environment are going to continue to struggle, and, since it is hard to identify the winners and losers at the moment, we are cautious of this sector.

In March alone, there were many bids for FTSE 350 companies. Bid targets included Hammerson, Laird, Shire, NEX Group, and Fenner, though no one has really put these bid targets together and discussed the surge. The cheaper pound has played a role in this increase in merger and acquisition activity, but we also think there is a wider sense of stabilisation in the UK economy, which has encouraged overseas bidders. We think investors have been reassured that global growth is picking up and that, in this context, UK growth can continue despite a great deal of negotiation still to take place regarding Brexit.

This is in fact a return to trend: the UK market, and particularly the FTSE 250, has always been an attractive hunting ground for international companies looking to bolt on unique bite-sized firms in certain sectors. These companies tend to be specialists in what they do, so it is not about overseas businesses adding the UK as a geography to their portfolio, but about adding expertise in a particular field. 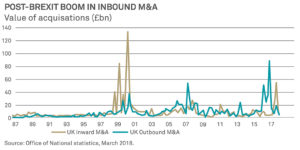 Up to 27 March 2018, the UK equity market was the worst-performing market year to date, out of 67 tracked by Datastream. Since the dividend yield of an index goes up when its capital value goes down, the UK’s dividend yield has picked up to an attractive 4%. It has only been higher in the past 20 years during 2008-09, and the dividend yield/bond yield gap has only been higher twice previously (during World War I and World War II). The recent derating of UK equities has driven the UK’s free-cash-flow yield towards 5%; this has only been higher once since 1995 (during 2008-09). Data from fund flows tracker EPFR Global has also shown there have been net outflows from UK equities in five of the last six years, with particularly heavy outflows in the last two years. 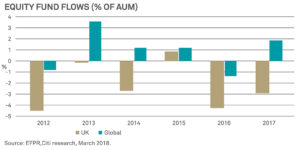 In our view, these are good indications of value, and make the UK equity market an increasingly attractive investment proposition.

The nerve gas attack allegedly conducted by Russia on UK soil led to the expulsion of Russian diplomats from the UK and more than 20 other countries. Notably, the US has gone a step further. Not only has it expelled 60 Russian diplomats, but it has also imposed sanctions on certain Russian oligarchs and companies, freezing property and financial assets and preventing them from transacting in US dollars.

Ramifications could be felt by wealthy Russians in London too, since Washington has warned British banks they could face severe penalties if they continue any dealings with the named oligarchs on the sanctions list. From a UK equity-market perspective, the sanctions have the potential to affect companies with significant stakes in Russian businesses, including a major oil provider.

Sisters are doing it for themselves – and the economy