UK Institutional Blog Posts UK Budget: a lot to be modest about

UK Budget: a lot to be modest about

Expectations of excitement were not high for UK Chancellor of the Exchequer Philip Hammond’s second Budget of 2017, and in the event it proved to be more a case of ‘boxed-in Phil’ than ‘box-office Phil’.

The chancellor’s dilemma was that pressure to ease up on austerity has been growing (and not only from Opposition benches), and yet future growth has, as expected, been downgraded markedly owing to expectations of continuing productivity constraints. The chart below from the Office for Budget Responsibility’s ‘Economic and financial outlook’ highlights how GDP growth has been persistently disappointing since the financial crisis. 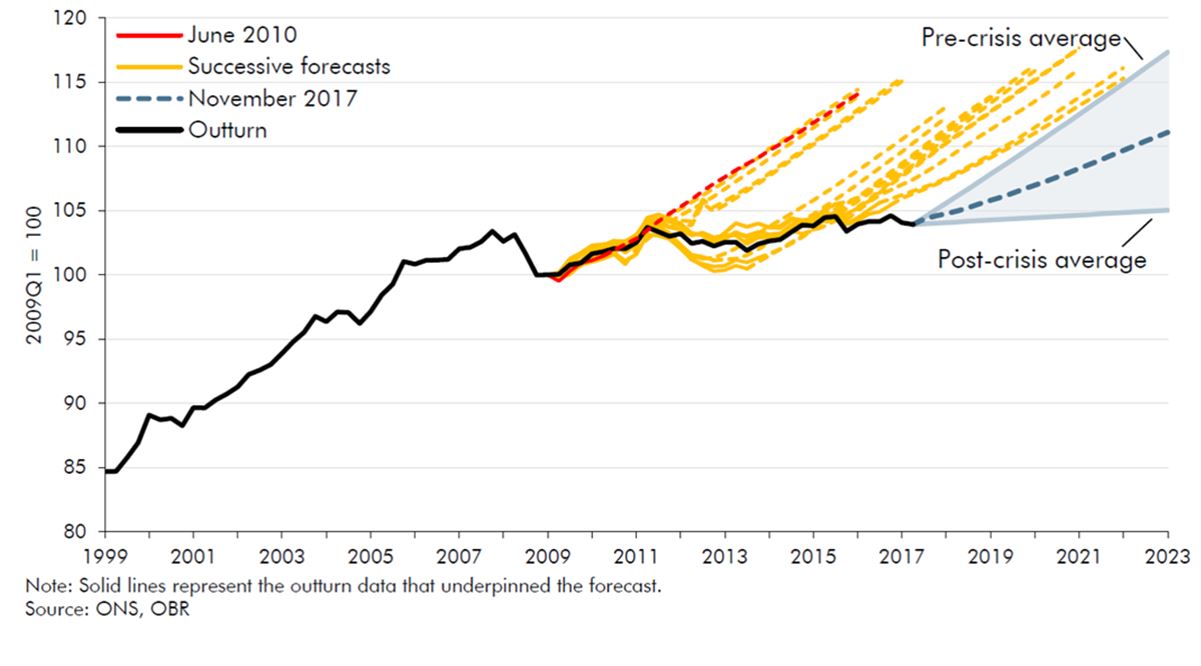 While there were welcome initiatives aimed at reviving productivity and fixing the housing market, these will take time to bear fruit, while the numbers involved are not game-changing in terms of the fiscal position. With diminishing fiscal headroom against the chancellor’s self-imposed aim of having a structural deficit below 2% by 2021, changes to expenditure and taxation were overwhelmingly modest. Hence there has been minimal reaction in the bond and currency markets following the announcement, with sterling unchanged against the euro, and 10-year gilt yields unmoved.

Measures announced equated to £3.3bn of loosening by 2021 compared to the March Budget, with seemingly most of this going to extra funding for the NHS. However, the cumulative effect of these modest extra spending commitments, coupled with downward revisions to growth assumptions (and therefore forecast tax receipts), is that borrowing over the next five years will be £29bn higher than forecast in March. This is in the middle of the £25-35bn range of most economists’ expectations, which accounts for the lack of market reaction.

With minor moves aimed at easing the pressure on real incomes, such as freezing the duties on most alcohol, the Budget should, if anything, ease inflationary pressures, but only very marginally, and the index-linked gilt market has barely reacted.

It was a small surprise that gilt issuance for the current fiscal year was revised up by £900m, rather than cut slightly (despite borrowing in the fiscal year to date running slightly lower than forecast), but the net change is ‘either side of nothing’ in the context of £115bn of gross issuance.

To conclude, it could be fitting to recycle a quotation from Winston Churchill about Clement Attlee: “Mr Hammond is a very modest man. Indeed he has a lot to be modest about”.

UK gilt yields: the long and short of it

A funny thing happened on the way from the referendum…

Movember for the MPC

Cautious messaging around the much-anticipated UK rate rise puts the focus squarely on the health of the economy.

Despite talk of a UK economic slowdown, the picture appears more mixed than outright negative.

A week is a long time in politics, and in the gilt market...

What could the UK’s hung parliament mean for Brexit and fixed income markets?