As we have mentioned before, our current macro view is that bond markets are in the middle of a transition year. This is owing to the gradual US monetary tightening process currently underway, which has a negative impact on different sectors of the bond market at different stages in the economic cycle.

First to feel the negative impact of the tightening were developed-world government bonds, followed by emerging-market sovereign bonds. Finally, the effects ripple out into the real economy and thus to high-yield corporate bonds. To help map out how this process plays out, we have put together the clock below, to show which parts of the bond market are affected, and at what ‘time’ in the market cycle.

Prior to 2016, we were at midday on the clock – the growth stage – when economic growth was strong and monetary policy was loose. Then the US Treasury market started to react to the US Federal Reserve’s (Fed) decision to raise rates and talk of reducing its balance sheet, which sparked a sell-off in US Treasuries in the second half of 2016. This period equates to 4pm on the clock below. We have been experiencing stage three – the unwinding of US monetary policy (8pm on the clock) – since the beginning of this year, as the tightening of US-dollar liquidity causes stress in emerging-market countries exposed to US borrowing. Stage four, at 9pm on the clock, is the point at which US Treasuries rally and credit sells off as the economic outlook deteriorates. At this stage, we think high-yield bonds (and probably equity markets) are likely to be in decline on the negative outlook.

Our best guess is that this could occur in the fourth quarter of 2018 as the market becomes concerned about 2019 economic growth forecasts, and is able to make an educated guess as to when the Fed will stop raising rates.

As the clock below shows, the tightening cycle is gradual, but eventually there will be a price to pay for assets that have run ahead of growth.

Telling the time in bond markets 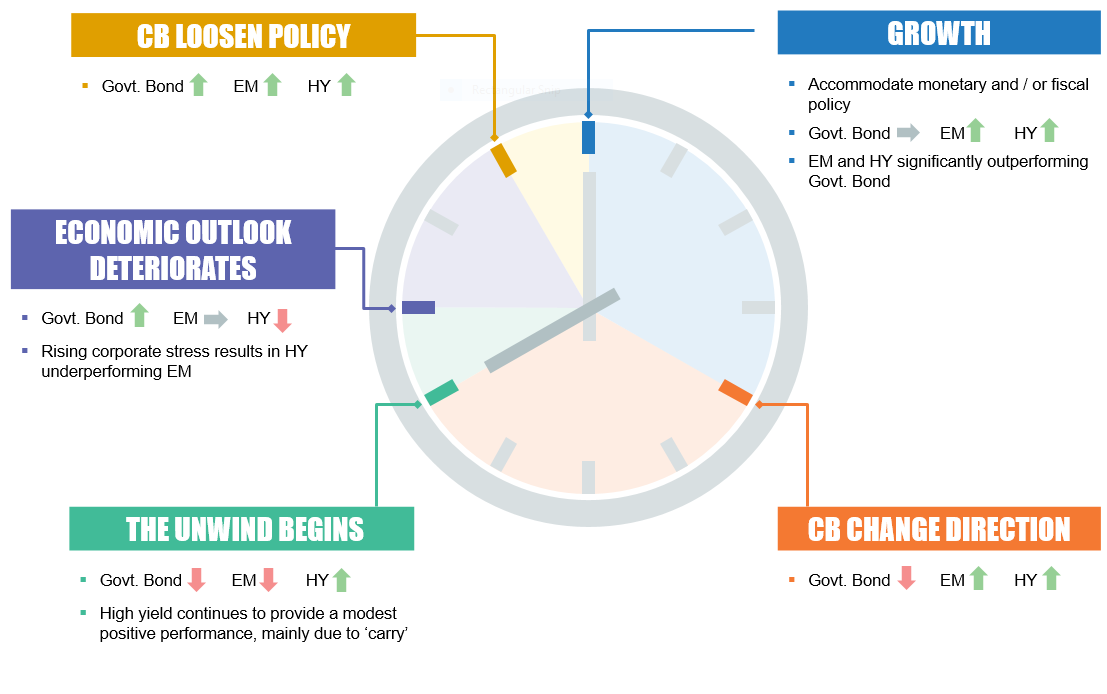 Do you want kale with that?