Something is not right in the world of central banking – prices are not doing what they’re supposed to, or at least what the central banks’ carefully calibrated models suggest they should be doing. The impudence! According to the Phillips curve, a mainstay of the central-bank toolkit, as unemployment falls inflation should rise. But the consumer price index (CPI) numbers just aren’t playing ball.

Since 1958, when William Phillips published his seminal paper,[1] a wide body of research has emphasised the role of economic slack in driving inflation in prices and wages. In essence, this is a supply and demand story; as demand for labour increases relative to supply, unemployment will fall and businesses have to stump up higher wages to get the labour they need (see below). Higher wages increase unit labour costs, thus eroding profit margins and causing businesses to increase prices. However, wage growth does not necessarily lead to higher unit labour costs. If a company is able to increase productivity, thereby reducing costs per unit, it is conceivable that some of the cost saving can be shared with labour in the form of higher wages without reducing profit margins. Thus a conventional Phillips curve (see below) embodies the view that as economic slack declines and unemployment falls, productivity gains aside, unit labour costs will rise, prompting businesses to increase prices. 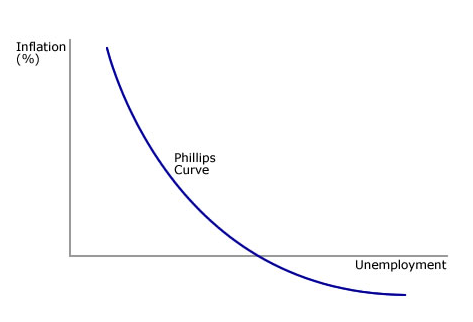 While the Phillips curve may have done a decent job of explaining inflation over the period for which William Phillips first calibrated his model, recent evidence suggests that its powers of prediction have waned, particularly in the aftermath of the global financial crisis. Has the relationship between inflation and the labour market weakened so much that a continued tightening of labour markets poses little threat of a material acceleration of inflation? In the US, Germany, Japan and the UK, where unemployment is at levels that historically indicated a lack of economic slack, subdued wage growth and inflation is widely attributed to a decline in labour pricing power. But this is by no means a recent phenomenon.

Global labour markets have seen profound changes over the last few decades. In developed economies, large swathes of the workforce have seen their pricing power eroded on a multi-decade basis, suggesting structural forces are at play. Two in particular warrant highlighting.

First, the opening up of the former Soviet bloc and China joining the World Trade Organisation (WTO) led to a dramatic expansion of the global labour force, roughly doubling the effective labour force involved in world trade. Corporations took advantage of this economic integration to expand global supply chains and substitute labour in advanced economies for relatively cheaper labour in less developed economies.

A second factor has been the adoption of labour-saving technologies. The implementation of new technologies to reduce demand for labour is nothing new, but it has had a significant impact on the demand for skilled labour in developed economies. At the same time, technologies of the information revolution mean that many types of service-sector employment, traditionally a mainstay of many white-collar middle-income jobs, are now threatened with obsolescence. In the US for example, the e-commerce industry requires only 0.9 workers to generate $1m of revenues, whereas traditional bricks-and-mortar retailers require 3.5.

It should also be noted that, despite the central-bank fetish with inflation targeting, supposedly in pursuit of economic stability,[2] a free-market economy where the forces of creative destruction are at work is naturally predisposed towards disinflationary pressures over the long term.

To take one example, technological progress has realised a decline in the cost of producing light that is difficult to grasp. The environmental economists Roger Fouquet and Peter Pearson have retraced this development in England. One hour of light (referred to as the quantity of light shed by a 100-watt bulb in one hour) cost 3,200 times as much in 1800 in England as it does today, amounting to just over 150 of today’s US dollars. In 1900, it still cost around 5 dollars. By 2000 the cost was 5 US cents.

This technological advance can also be thought of in terms of the amount of time that an average worker needed to labour in order to earn enough for the 100-watt bulb to glow for an hour. In 1750 BC, the people of Babylon used sesame oil to light the lamps, and had to work for 400 hours to produce the said amount of light. In around 1800, using tallow candles, 50 hours of work was required. Using a gas lamp in the late 19th century, three hours were necessary. Using an energy-saving bulb today, you will have to work for the blink of an eye – a second. This amounts to a phenomenal advance in productivity and thus prosperity. 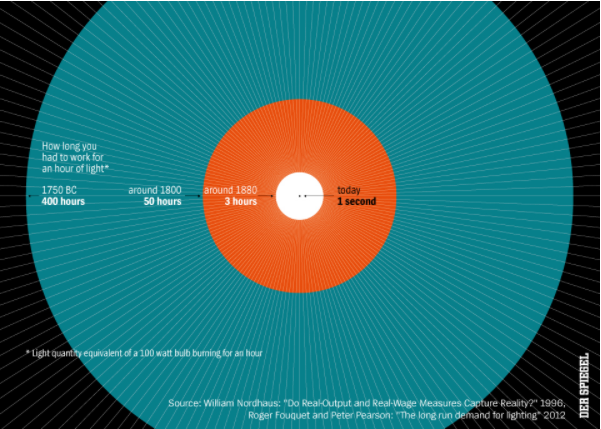 Over recent decades, the combination of a larger pool of global labour, transformative technologies and the expansion of global value chains has led to a massive supply shock that has generated the ‘good’ disinflation which advances prosperity for the world’s population as a whole. Nevertheless, the inflation-targeting orthodoxy that dominates central banking has ensured an inflation of the money supply in an attempt to thwart the supposed menace of falling prices, but there are good reasons to believe that this policy framework has had its day.

Time to retire the Phillips curve?

The above structural changes are likely to have played a role in the weakening of the relationship between unemployment and inflation since the relatively short period of history incorporated into Phillips’ original model. The relationship is now unstable at best, and often wholly elusive. Combined with the fact that the process of creative destruction ensures that prices fall over the long term, the difficulties in finding a significant response from inflation to domestic unemployment should not be that surprising.

In other words, the Phillips curve looks rather flat.

[2] Erroneously in my opinion