I wrote recently on the blog about our belief that we are on the brink of an artificial intelligence (AI) revolution, and our expectation that the implications of this new form of intelligence will be profound – not just for private and publicly listed companies, but for society as a whole. 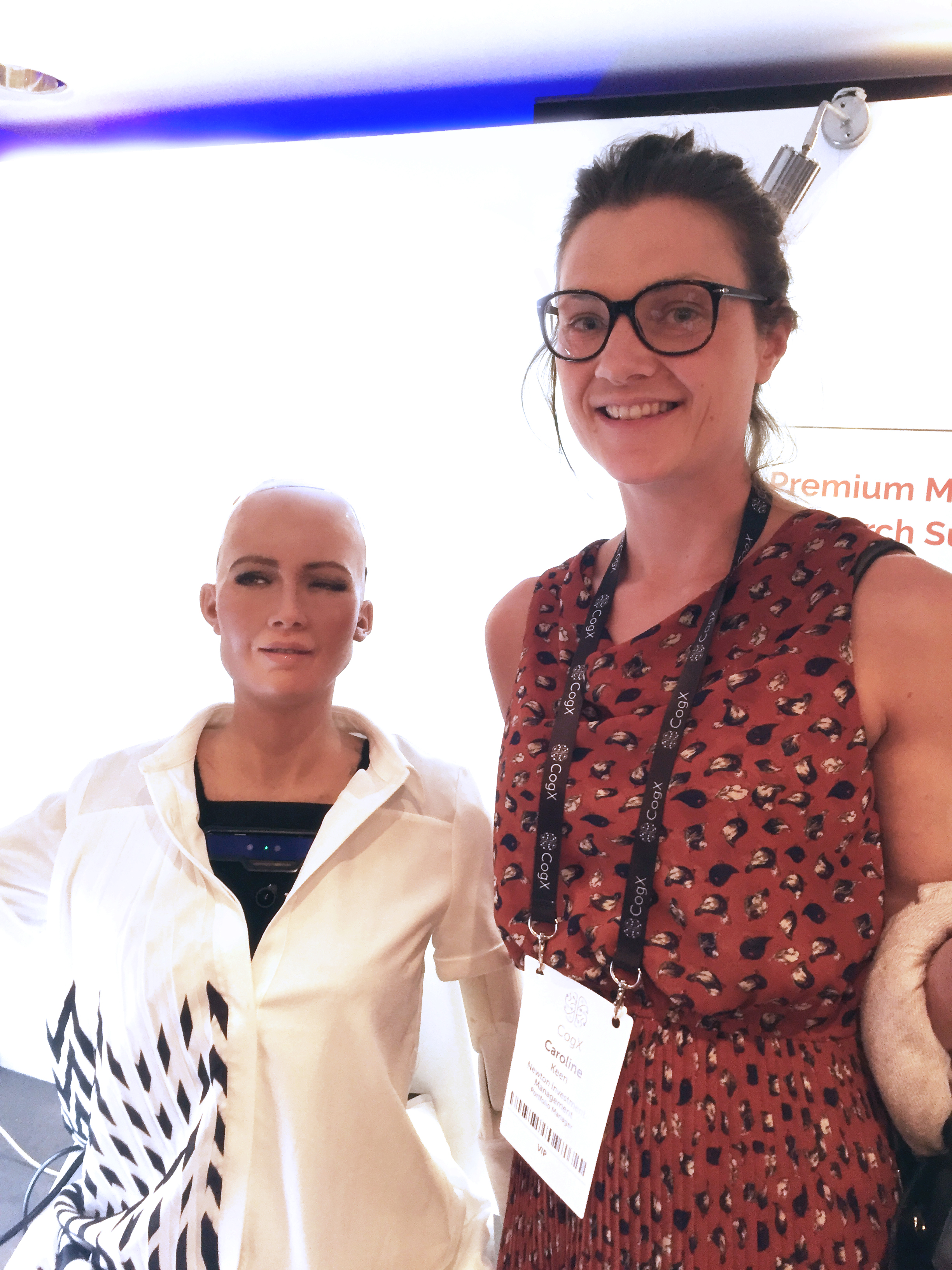 Recently, I was lucky enough to see the latest developments in this technology when I met Sophia.

As you may be able to see from the photo, Sophia is not an analyst, an engineer or a scientist, but a humanoid robot.

She is the creation of Hong-Kong based Hanson Robotics, founded by Dr David Hanson, a scientist on a “quest to realise Genius Machines – machines with greater than human intelligence, creativity, wisdom and compassion”.[1] You can watch Sophia in action on The Tonight Show here (Sophia appears two minutes in).

With 36 motors in her face alone, Sophia is incredibly lifelike, not only in her initial appearance (she is well dressed and made up), but also in her facial expressions and movements. She makes eye contact, recognises faces, understands speech and can hold a natural conversation.  Her face is created with a patented material called ‘Frubber’ (flesh rubber), a proprietary nanotech skin that mimics real human musculature and skin – adding to her human-like appearance.

But why does she need to be so lifelike?

Many, including Dr Hanson Sophia’s creator, believe that humanoid robotics is the best way to get the most productive (and friendly!) outcome from artificial general intelligence (AGI).

It is well known that humans are fascinated with the human form – from classical statues to paparazzi shots in magazines. We attribute identity to faces and bodies, and if robots are humanoids we can hold them to our social standards and read their thoughts and feelings through their body language.

Moreover, a good looking robot can hold people’s attention for longer, which has great potential benefits from an education or customer experience perspective. The thinking is that, as we humanise these machines, we in turn display emotions towards them. If this interaction is personified, we want to interact more.

There is evidence too that humans can empathise with a humanoid robot that appears to be in pain. Empathy is one of the most important abilities for appropriate social communication – and it is vital as a ‘learning’ machine that these robots have meaningful and suitable interactions with humans in order to evolve.

However, this does lead to some serious and uncomfortable questions which will have to be addressed: Should you treat a humanoid robot as you treat a human? What impact could our interactions with humanoid robots have on our human relationships? Is it ethical to perform psychological experiments on robots which we couldn’t perform on humans?

It is likely these forms of AGI could be much more intelligent than us, and checks will need to be put in place to make sure we can’t be manipulated by them.

We believe it will take time for us to get used to truly intelligent machines. They will need to prove their usefulness and worth, but, the more they do, the more we will trust them. In turn, the more trustworthy they will then become.

To me, the augmentation of our own intellectual capacity is a positive development, but applications in the service or professional industries are more palatable than within the home. The technology is still far away, and computational power limitations still cap its capabilities, so we have time to establish suitable boundaries to its applications and set up appropriate regulations.

The use of robots and AI in society may at first seem uncomfortable, but believe it is also inevitable and worth following with great interest.

Credit where credit’s due

A blueprint for post-retirement?

Caroline is a portfolio manager on our emerging and Asian equity team. She is the lead manager on the Newton Oriental and BNY Mellon Asian Equity portfolios, as well as playing an integral role in the management of the Newton Asian Income portfolio.