The transition to green energy is accelerating, with 2018 expected to deliver new investment opportunities as technological innovation and falling costs drive further momentum for change.

What started as a government-subsidised process to decarbonise the power sector is now shifting to a process driven by expenditure and economics. Over the next 12 months, as the cost of clean technology continues to fall, we expect to see an acceleration in investment, in both developed economies and fast-growing industrialising nations.

Against this backdrop, the ability of renewables to deliver what we think are stable and sustainable income streams means they are likely to remain an attractive source of dividends and total returns.

The speed at which the world is shifting to clean technology has taken even experts by surprise. Almost two-thirds of net power capacity added around the world in 2016 was renewable, with 126 gigawatts of solar and wind-based power dwarfing the 86 gigawatts from coal and gas, according to a report from the International Energy Agency.[1]

This was the first time global growth in solar power capacity had overtaken new coal-fired generation. However, this milestone is expected to be quickly eclipsed. Bloomberg New Energy Finance (BNEF) predicts the renewable share will grow to three-quarters of the US$10.2 trillion the world will invest in new power generating technology until 2040.[2]

For investors in countries like the US and UK, where government subsidies are being cut and climate change is still widely contested by leading politicians, the profound transformation taking place globally has been easy to miss. This last year is likely to be remembered chiefly for the Trump administration’s decision regarding the Paris Agreement on climate change.

However, even a climate-change sceptic in the White House and reductions in government financial support are unlikely to stall the momentum driving the energy transition in both developed and emerging markets.

Just a decade ago, high generation costs meant predictions of a move from a coal, gas and oil-fired world to one where solar and wind make up the bulk of energy capacity would have been met with doubt, if not derision. That has all changed, thanks to the steep fall in the costs of solar and wind power production.

Solar photo voltaic modules are down 90% in price since 1990. BNEF predicts wind and solar power will be cheaper than coal-based energy in many countries within five years and could provide up to a third of global electricity within 25 years.[3]

Some investors have expressed unease at government subsidy cuts, implemented in recent years in key markets such as the UK. However, where reductions in subsidies are occurring, they are being carefully managed.

In the UK, for example, projects already receiving subsidies will continue to collect them for the full life of the contract, generally 20 to 25 years. Half of revenue streams are still backed by government subsidies, meaning they are fixed and linked to inflation.

It is also important to remember that subsidy cuts are a sign that the sector is maturing. We have reached a point where renewable projects require less government-backed financial assistance.

Even without subsidies, in many countries solar is now price competitive with any other energy technology. In 2017, Dong Energy said it would build two offshore wind farms in the German North Sea without any government subsidies, relying on market prices alone.[4]

Manufacturers are working to almost double the capacity of the current range of turbines, which already have wing spans that surpass those of the largest jumbo jets. The expectation those machines will be on the market by 2025 was at the heart of recent contracts won by German and Danish developers to supply electricity from offshore wind farms at market prices by 2025.[6]

Huge sums are also being spent on research and development in the battery space, and developments in battery technology will be crucial for the further adoption of green power.

The cost of storing power in batteries, which in the past has hampered the use of renewable energy, has already declined rapidly as battery production has been ramped up to meet growing demand for electric cars. The International Renewable Energy Agency predicts that by 2030 the installed costs of battery storage systems could fall by 50% to 66%.[7] 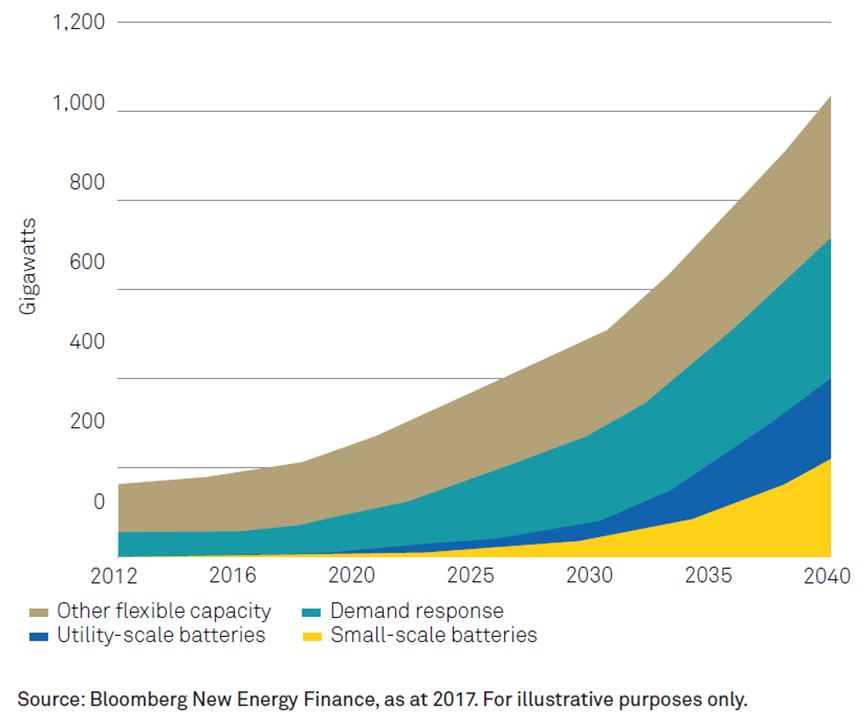 As the costs of production have plummeted, fast-growing industrialising nations have joined the renewable revolution. Developed nations have long been leaders in renewable power generation, but emerging markets are expected to overtake them in their capacity to generate wind and solar power in 2018.[8] China is already the biggest investor in renewable energy worldwide and is keen to be at the forefront of renewable engineering capabilities and technologies. Other industrialising nations are following its lead, as emerging-market governments pursue a renewables approach more aggressively.

India, for example, has promised electricity for its entire population by 2018. Given that around 30% of Indians don’t currently have access to electricity, we think the country is unlikely to achieve that goal. However, solar and renewables are likely to play a significant part in its attempts to meet this ambitious target. 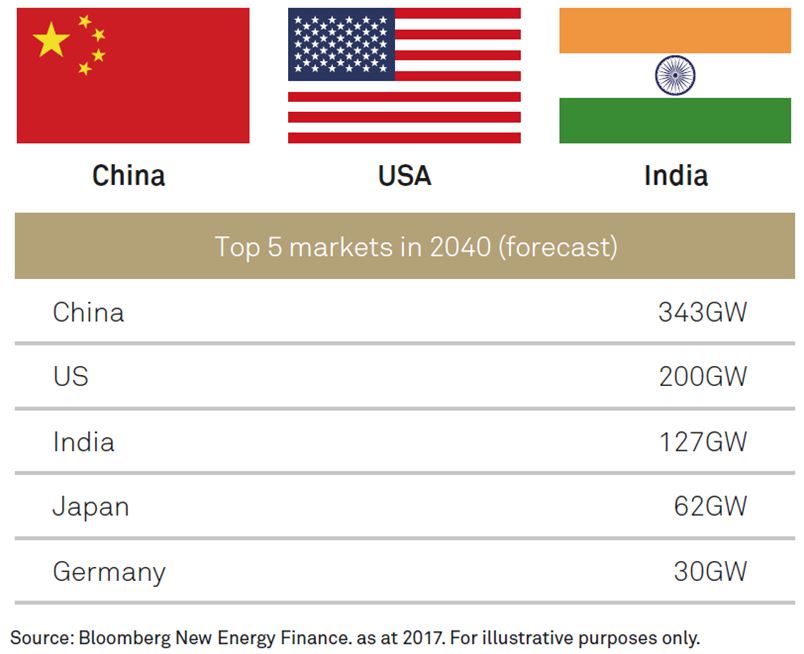 From a geographic perspective, we believe both developed and emerging markets hold enormous potential for the continued development of renewables. There is still much room for growth even in developed markets. The rollout of renewables in Australia, for example, is still in its infancy.

In the US, some fear Trump’s stance on climate change could hamper innovation in green technologies. However, the vast majority of decisions are taken at the state level, and many US states, including oil-friendly Texas, have made major commitments to renewables.

That’s not to say the future is free from challenges. We believe the key attractions of renewable-energy assets are their stable cash flows, low sensitivity to the economic cycle and inflation linkage – all attractive properties, we think, for the long-term investor looking for a consistent income stream and to protect their assets from the ravages of inflation.

As fixed and inflation-linked subsidies are withdrawn in favour of competitive auctions or tenders, revenues will become more dependent on power prices, introducing potential volatility. More care will need to be taken analysing the trajectory of future revenue streams.

However, it is important not to overstate the threat. Electricity prices would not be expected to change dramatically over time, so revenue streams are still likely to look relatively stable compared to those of other assets. Indeed, we may see the emergence of ‘off-taker’ agreements, where large corporates fulfil renewable energy commitments by striking long-term contractual agreements with renewable suppliers. This should help to guarantee the power price received, providing valuation support for renewable assets.

What lies ahead for fixed income?

A quarterly update from our responsible investment team

Sustainability Summit 2018: the evolution of ESG

What’s next for responsible investing?