UK Institutional Blog Posts Please sir, can I have some more?

Please sir, can I have some more?

In light of changing attitudes to remuneration, I undertook, as the then chair of the International Corporate Governance Network’s (ICGN) Remuneration Committee, along with my fellow committee members, the significant task of revising the ICGN’s executive and non-executive remuneration guidelines. These were published earlier this year.

Remuneration continues to be a hot topic in the press and politics. It’s an area we frequently address at Newton when conducting research and engaging with companies as part of an approach which integrates environmental, social and governance analysis in our investment process.

Income inequality in particular has been grabbing headlines, a subject highlighted by our ‘mind the gaps’ investment theme.

As the chart below shows, the gap between the ‘haves’ and the ‘have nots’ is widening, with the wealth of the top 1% having increased steadily since the financial crisis while the bottom 90% has stagnated. 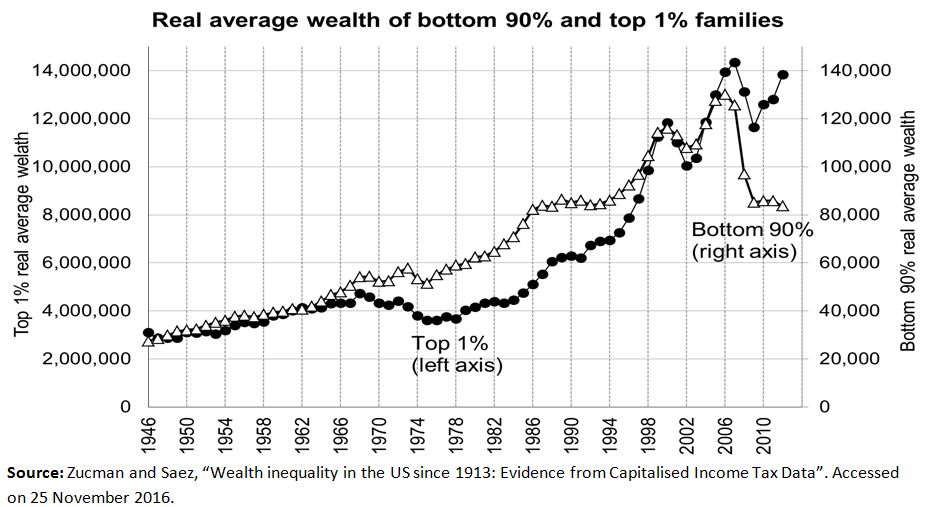 This wealth gap is reinforced by a growing divergence in remuneration between the lowest and highest-paid employees.

Today, the average FTSE 100 boss is paid 129 times as much as their average employee – a huge leap from 47 times in 1998.[1] Such high pay doesn’t necessarily correspond to high performance; a study by corporate research firm MSCI of US companies between 2005 and 2014 found that companies with lower total CEO pay levels consistently generated higher long-term investment returns than their more generously paid counterparts.[2]

This gap is increasingly attracting political attention too; take, for example, the UK prime minister’s pledge to create ‘a country that works for everyone’, reform corporate pay and governance, and focus on improving life for the ‘JAMs’ (those who are ‘just about managing’).

However, little has been done so far to address what is clearly an unsustainable situation. Cracks are already starting to show, and, empowered by social media, those who feel they are on the losing side of this growing pay divide are making their voices heard. Take the London riots in the summer of 2011, or the rise of populist, anti-elite sentiment which contributed to the Brexit vote and Donald Trump’s victory in the US presidential elections.

What are the effects of this growing pay divide?

– Productivity: A ‘them and us’ culture among a workforce leaves employees feeling unmotivated and disenfranchised, which is negative for productivity.
– Employee turnover: Failure to ensure workers feel appreciated and satisfied with their work can lead to them being poached by competitors. In such an event, a company may end up losing valuable, experienced employees and have to undertake expensive recruitment exercises.

Ultimately, it is conceivable that income inequality could lead to some form of civil unrest. While this is a doomsday scenario, we do not know what the inflexion point will be, and governments, companies and shareholders may wish to pre-empt such an outcome.

Often it can be costlier, in financial, reputational and productivity terms, for a company to fix a problem than to have made the right decision in the first place.

How can companies get it right?

The ideal situation is one in which each employee’s remuneration, from top to bottom, is aligned with the performance of the business.

One current area of discussion is the publishing of pay ratios, something which is subject to a government consultation. We are broadly in favour of this. Something needs to be done to stem the tide of ever-growing pay gaps, and we believe the potential embarrassment factor for firms could persuade remuneration committees to take action.

Another controversial topic is the use of benchmarking, whereby a company sets their executive remuneration against a highly engineered peer group. We believe this has been a primary cause of growing pay packages for senior management; the detailed disclosure of the separate elements of individuals’ remuneration has enabled more comparison between peers.

The issues around remuneration will not remain static, and will continue to attract press and political attention. Investors have a key role to play in the evolution of remuneration practices, and they can create the impetus for change. As stewards of our clients’ assets, we believe incorporating analysis of remuneration practices, and engagement where we believe there is an issue, is a vital part of the in-depth research we conduct on each security in which we invest.

Ian is head of corporate governance at Newton.