Recent wobbles in some US peer-to-peer (P2P) lending companies have highlighted the risks inherent in the industry. P2P platforms seek to disintermediate the banking sector by linking savers (investors) directly with borrowers, as shown in the stylised graphic below. 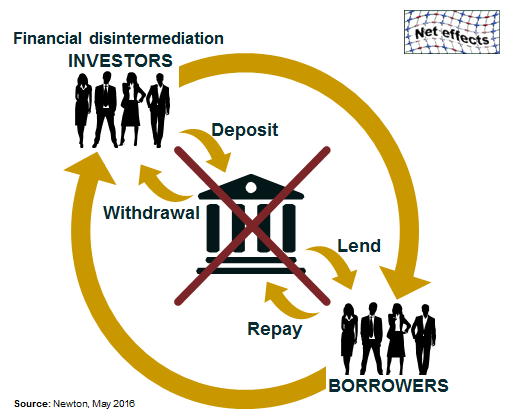 Through the use of technology, P2P platforms have a cost advantage over traditional banks, most of which are weighed down by poor legacy IT systems, expensive branch networks, and exhaustive regulatory requirements. Through their cost advantage, P2P companies can enter markets which are often poorly serviced by banks (e.g. small business loans), and extend credit to borrowers at lower interest rates, while still capturing a reasonable yield for investors and a profit spread for themselves.

While this model has some attractive attributes, we believe its major drawbacks have come to the fore in recent months:

P2P companies are directly funded by institutional and retail investors, unlike banks which typically have large-scale deposit funding. Many platforms have come to rely increasingly on institutional funding, particularly from hedge funds, which has been shown to be flighty both in times of stress and when better returns are on offer in other asset classes.

P2P lenders typically derive most of their revenues from a fee which is linked to the origination of each loan; so, when funding dries up, originations dry up and revenues fall. This is in stark contrast to most banks, which derive revenue from a diversified product suite.

With a limited track record, in many cases unproven credit models, and operations in risky lending areas, poor underwriting could lead to much higher-than-expected losses on loans. While most P2P lenders have no direct ‘skin-in-the-game’ (as loans are sold to investors), they are vulnerable to reputational damage. Red flags are already appearing, with some lenders seeing losses beyond their expectations on certain loans, and some lax underwriting practices – reminiscent of those we saw in the lead up to the global financial crisis. There is also a risk of mis-selling claims if unsophisticated retail investors have been enticed to invest in opaque and risky loans.

The P2P lending industry has seen explosive growth in origination volumes. This illustrates some of the attractions of the P2P model, but it also raises concerns around operational controls and risk management. Indeed, as the industry has grown larger, it has attracted increased interest from regulators.

At Newton, we have been cautious about the P2P industry since its infancy. Through better technology, P2P companies have been able to disrupt traditional banks by driving simplicity, convenience and speed in lending decisions – highlighting the customer service shortcomings of traditional banks. Nonetheless, other attributes of the P2P model may not be as enduring. We believe that we need to see the industry go through a full credit cycle before P2P companies offer an attractive long-term investment proposition.

“Sell in May and go away”? – A bond-market perspective