Out of left yield

Forecasters often anchor their predictions for interest rates and bond yields on some core assumptions. Implicit in the current consensus expectation of interest-rate ‘normalisation’, and in forecasts of rising US Treasury yields, for example, is the belief that interest rates (and yields) should, in the long run, be close to the growth rate of potential nominal GDP. Indeed, this assumption is consistent with the framework used by the world’s leading central banks.

However, using the nominal US GDP growth rate over the last ten years as a proxy for the potential rate of growth of the economy, the chart below shows that the US 10-year Treasury yield has actually traded below this ‘fair value’ estimate of interest rates since the end of the year 2000. 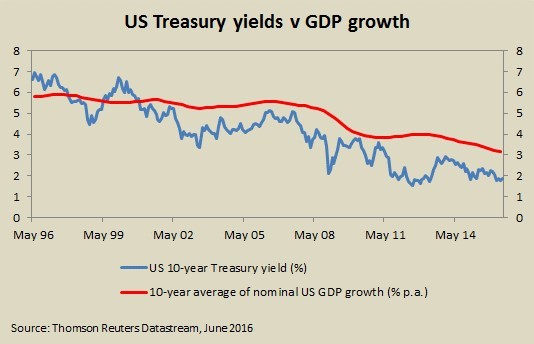 Surely this means that either the pace at which yields revert to this ‘fair value’ average is too slow to be meaningful for most investors, or the model is just wrong.