UK Institutional Blog Posts What lies ahead for fixed income?

What lies ahead for fixed income?

With the global economic background positive and inflation expectations starting to rise, there is a tendency to suggest that a bear market should continue to develop in bonds. Central banks are gradually reversing their very loose monetary policy by reducing quantitative easing and raising rates which, initially, has tended in the past to be negative for government bond markets. We believe, however, that risk assets such as emerging-market bonds and credit can continue to do well in this environment.

At some point, we anticipate that this tightening of policy will have an effect on the economy (and, before that, risk assets), bringing any government-bond bear market to a premature end. This does not appear to be the case as we start 2018, but could easily become a problem in the second half of the year.

The shape of yield curves can be a good indicator as to when this transition will take place. In the run-up to 2008, the yield curve flattened and then inverted – depicting lower yields on longer-dated issues, and predicting a recession. In the US, the yield curve has been flattening since the end of 2013, but has yet to invert. We think this year is likely to be one of transition for bonds, which warrants a cautious level of interest-rate risk initially while the central banks get into their policy-tightening stride. The high level of borrowing at both corporate and government levels has undoubtedly raised the economy’s vulnerability to higher rates. At some point this year, we would expect risk assets to wake up to this tightening phase and reprice, prompting a demand for safe-haven assets such as government bonds.

The following are some investment areas which we think can help with our underlying bond-market ideas: 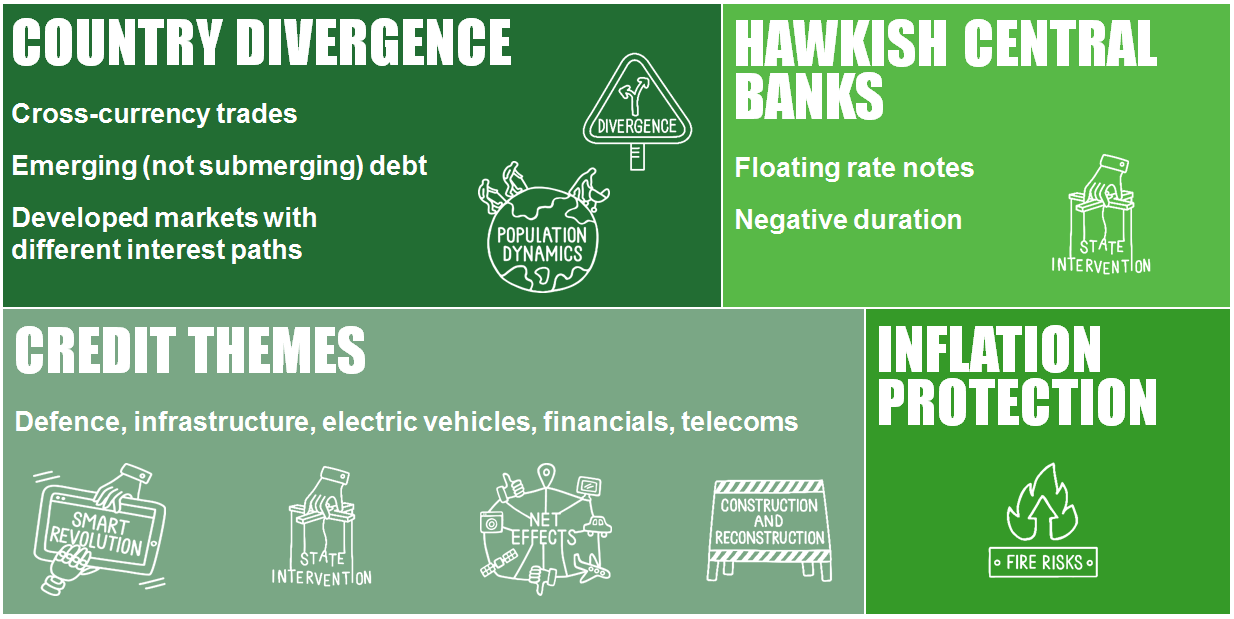 Bond markets have been the main tool for these extraordinary monetary policies. Given historically low bond yields, some suggest that the bond markets have been the main beneficiaries. We would argue that other asset classes have also benefited, and some – cryptocurrencies for example – look more like bubbles to us. With global growth looking set to continue along the same robust path as last year, this reversal of the loose monetary policy could raise bond yields first, before eventually causing issues elsewhere. In seeking to benefit from this hawkish environment, a flexible fixed-income approach can allow us to take short positions in government-bond markets using futures and options. Investing in securities that have coupons linked to rising cash rates may also help. We have used these strategies in the last few years, but they are likely to feature more heavily in 2018 as a potential profit centre rather than just a hedging tool.

With employment running at high levels in some economies, there may be pockets of wage pressure and a corresponding lift in inflationary expectations. If this proves to be the case, one useful strategy could be investing in bonds with inflation protection such as US Treasury Inflation-Protected Securities (TIPS). We invested in TIPS in 2016 and 2017. Inflation expectations can overshoot, however, so we generally look to adjust the weightings in these securities tactically.

We are continuing, for example, to invest in companies that are benefiting from increased defence and infrastructure spending, the shift to electric vehicle production, and the sound balance-sheet management of banks.

Although some central banks are tightening policy, others will not need to. This will cause currencies to diverge and yield curves to change shape. In addition, a prolonged spate of positive global economic growth should improve the credit quality of some countries, and lead to rating upgrades.

What next for global equities?