The release of last month’s non-farm payrolls report on the US labour market led to much consternation in financial markets, given that it came in much weaker than expected. Beforehand, expectations of rate rises over the summer months had been building following a wave of more upbeat assessments of the economic outlook from various Federal Reserve (Fed) officials over recent weeks.

Market expectations of rate increases were dealt a hammer blow, and virtually completed a round trip – back to where they were before those more ebullient assessments.

The reality is that the soft employment data shouldn’t have come as that much of a surprise as the labour market has shown nascent signs of weakness for a number of months – as seen for example in the Federal Reserve’s own Labour Market Conditions Index (LMCI, see below). Introduced in March of last year, the LMCI incorporates data from 19 traditional measures of unemployment to create a consolidated picture of the labour market, and it has grown pretty ugly since the start of the year, falling 14.9 points in the last five months. 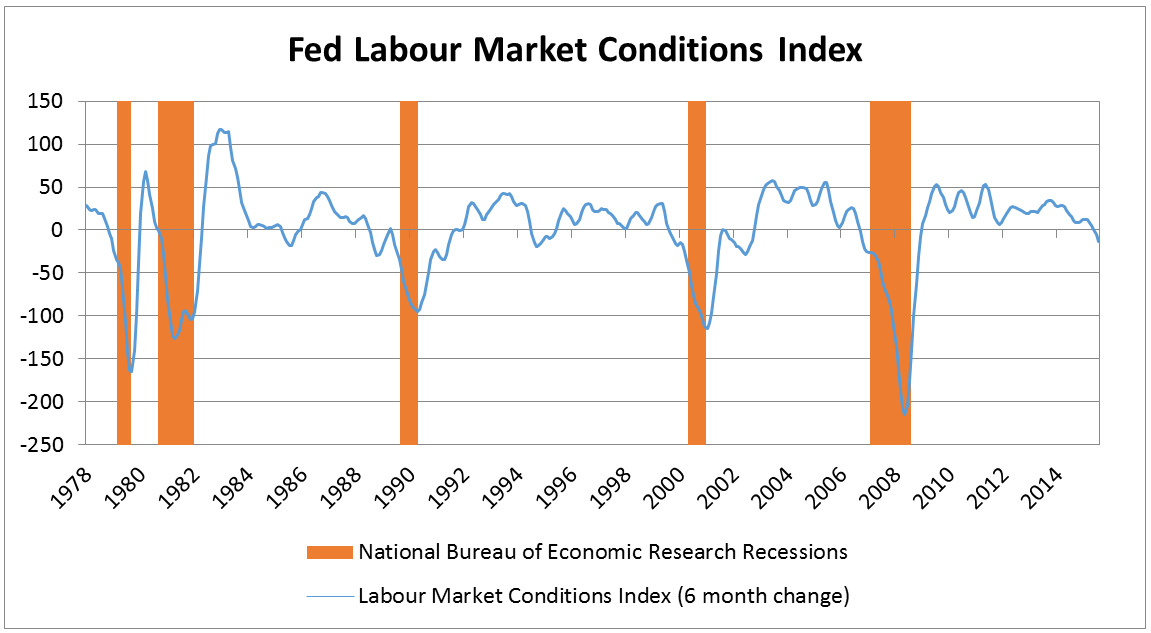 Furthermore, the labour market is a lagging indicator of the business cycle. Its deterioration, if confirmed over the coming months, wouldn’t so much foretell a slowing economy as corroborate other signs of weakness – in, for example, corporate investment, business confidence and the apparent peaking of company profits.

The Fed operates to a dual mandate of maintaining full employment and 2% inflation. While inflation has remained stubbornly below its 2% target over the last four years, the central bank has pointed consistently to the continued improvement of the labour market as evidence that the various incarnations of extraordinary monetary policy have been working. It has also seen this improvement as support for its contention that the economic recovery is sufficiently robust that monetary stimulus can be reduced.

The recent deterioration in the labour market comes, therefore, at an inopportune time for US rate-setters.

While it is evident that the Fed would like to increase interest rates further, the reality is that, with inflation subdued and nascent weakness in the labour market emerging, the Fed has little substantive reason to pull the trigger.