Japan’s demographics: Working it out

Japan’s demographic time bomb, fuelled by a dangerous mix of a low birth rate and long life expectancy, is a familiar subject for investors.

The National Institute of Population and Social Security Research in Japan forecasts that the population will fall from 127 million in 2015 to 88 million in 2065.[1] 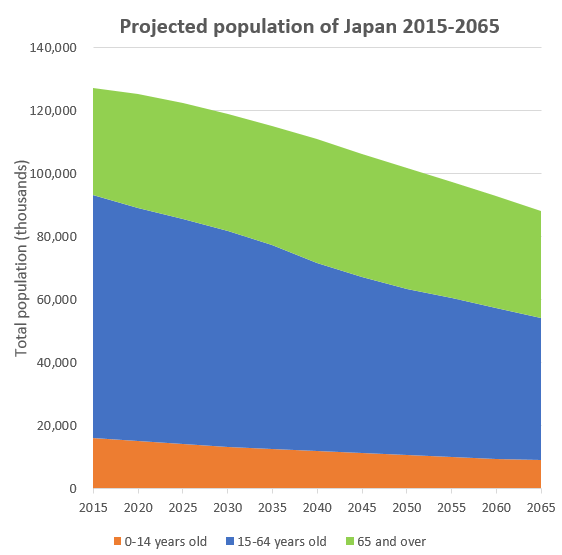 Further, owing to benign macroeconomic conditions and a slow attrition of the elderly, Japan’s unemployment rate has been ticking downward, while the jobs per applicant ratio is high, having risen since 2009. 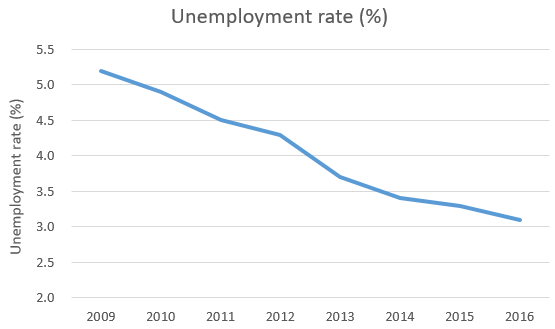 However, despite a shrinking working-age population and a declining unemployment rate, the labour force has actually increased over the last ten years, owing to increased participation by women and the elderly. 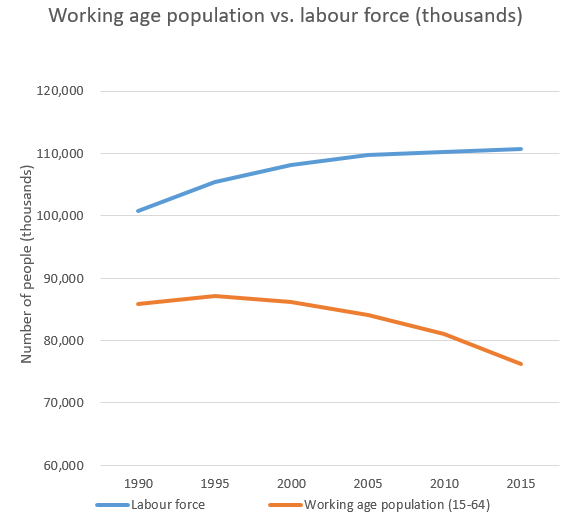 Despite being more likely to have a university degree, women in Japan are less likely to be employed, and on average earn 27% less than their male counterparts. This is the third-highest gender pay gap in the OECD.[3] However, as the chart below shows, the number of women in Japan’s labour force has been increasing and is projected to continue its steady upward rise from 49% of the total labour force in 2014 to 52% by 2030. [4] 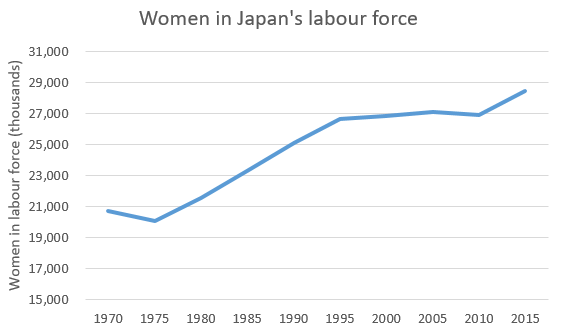 This has been encouraged by the government, which has introduced a number of new measures, from increasing the number of childcare places available to targeting a goal of 30% of leadership positions being held by women by 2020 – although this is a very aggressive target and unlikely to be achieved.

Even with government support, there are still a number of social and cultural barriers to overcome when it comes to returning to work after childbirth, and there is a lack of support in most work places for the flexible work arrangements needed to accommodate working parents. 70% of women give up work after their first child (compared with just 30% in the US),[5] and despite offering 52 weeks of paid parental leave for both men and women (the most generous package in the OECD), only 2% of new fathers in Japan took paternity leave in 2015.[6]

When mothers do return to work, they are more likely to do so in a part-time capacity in order to care for their children – so the upward trending number of women in the labour force may not provide the full picture. Nevertheless, the current lack of workers may prove to be a big tailwind in terms of encouraging a fundamental shift in attitudes towards working mothers.

Another source of workers for Japan has been the older members of its population, and this trend is set to continue (see chart below). Work is big part of the Japanese identity, and many of Japan’s elderly are happy to continue in employment to help them stay mentally and physically fit. Not only do Japan’s populace live longer, but they also remain healthier into old age; a World Health Organization study in 2000 found that the Japanese experienced an average of 74.5 years of health, which compares with just 71.7 in the UK.[7]

In 2013, the government introduced legislation to require employers to keep on all workers who want to stay until 65. Under this system, employees continue to work from 60 at a lower wage with reduced responsibilities and hours – this means that companies don’t have to keep paying their older workers an ever-increasing salary. Added to this, last year the government announced it would aim to raise its retirement age from 62 to 65 by 2025.

I recently saw this in action on a recent visit to a Japanese factory which made sandwiches for convenience stores. The factory was located in an area surrounded by higher-skilled manufacturing jobs (such as semiconductor production) which offered higher wages. The factory has overcome this competition for labour by employing more elderly workers (who make up 40% of the workforce) – as while its key job is manual, it is also low-intensity in nature. Through negotiation with the factory manager, workers are encouraged to work past 65 (up until even 72).

Recently, we have seen some bullish reports from the sell side outlining their belief that, following the logic of the Phillips Curve, as unemployment falls and economic slack declines, wages and CPI should increase.

However, this has not materialised as yet, given that core CPI remains at 0.1% and wage increases have generally stayed below 1%.

We think this is because of the ‘hidden slack’ in Japan’s labour market, specifically attributable to the high number of part time elderly and female workers. The level of slack in the system remains unknown, although some estimate it to be under one million at this point.

As such, we do not expect a big rise in wages or CPI anytime soon, and therefore we don’t expect a huge uptick in consumption. Further, with an ambitious inflation target of 2% from the Bank of Japan, the point at which Japan will reach an inflection point in terms of inflation remains unknown.

The ‘PRI in Person’ conference in Berlin

Yuko is a portfolio manager on our global equity team, specializing in Japanese equities.