While this morning’s report that Japan’s economy had grown at an annualised rate of 1.7% in the first quarter of the year may be seen by many as a boost for ‘Abenomics’ in the short term, we remain sceptical about the efficacy of Japan’s unorthodox policymaking. 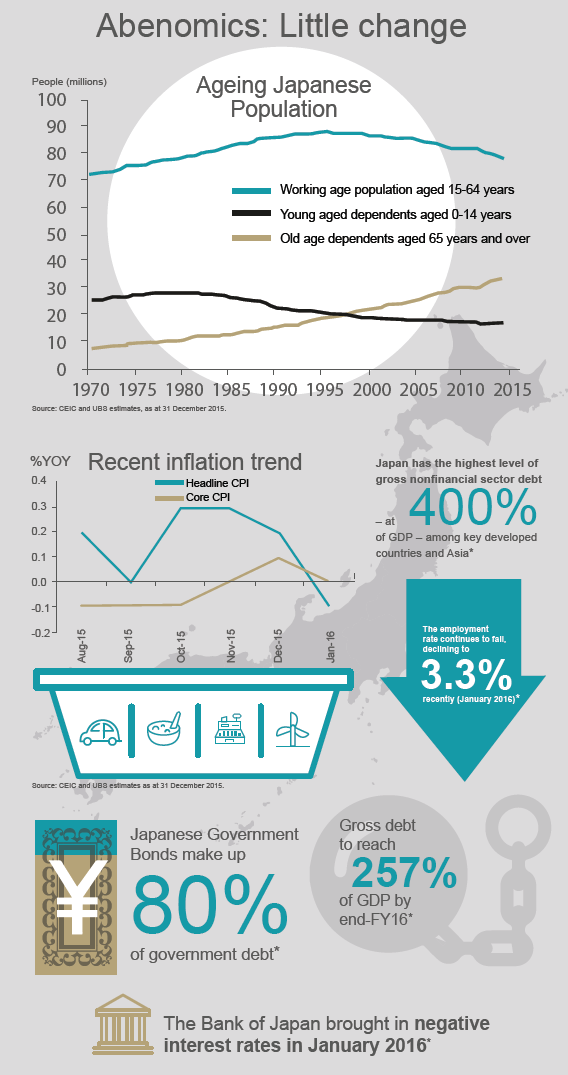 When Abenomics was launched in 2012 by Prime Minister Shinzō Abe, it trumpeted a 2% per annum increase in consumer prices within two years. But it seems to us that deflation is not, in itself, ‘the problem’, but rather a direct symptom of structural and societal factors affecting not just Japan, but most developed economies.  Japan’s demographic challenges are, however, particularly acute. It is hardly surprising that an economy that is seeing contraction in not just the working population, but also in the total population, is struggling to grow. This, allied with widespread domestic overcapacity (and a global lack of pricing power), goes a long way to explaining why mild deflation has been an issue in Japan for two decades or so.

Abenomics, as originally conceived, may have been a reasonable idea: implement painful structural reforms, and offset the discomfort with loose fiscal and monetary policy. The problem is that, in practice, little structural reform has been achieved; monetary policy, via the Bank of Japan (BoJ), has been the main lever via which authorities have sought to effect economic change.

Iain is a member of our Real Return team. He joined Newton in 1985, and specialises in the management of relative and absolute return multi-asset mandates.