Last November, the Indian government cancelled 90% of Indian bank notes, including all 500 and 1,000 Indian rupee (INR) notes. The idea behind this ‘demonetisation’ was to penalise those storing illicit cash or ‘black money’, by making them unable to declare it. A year later, the impact of the initiative has played out in a number of different ways across the broader economy.

With 99% of affected bank notes since deposited or exchanged for new money, the short-term impact of the currency shortage was economic hardship for much of the population. It dented discretionary spending and placed a brake on GDP growth, which dropped from 7.6% in the third quarter of 2016 to 6.1% in the first quarter of 2017.

However, despite this short-term pain for many, the longer-term consequences have been more positive for India’s broader financials sector. Combined with the Indian government’s Aadhaar scheme, which instigated the rollout of a 12-digit unique biometric identity card for every Indian resident, around 20 million new bank accounts have been created, and there has been a surge in the adoption of cashless payment methods. We view this as a lasting change in spending behaviour which may boost consumer spending levels over the longer term, and improve efficiency. 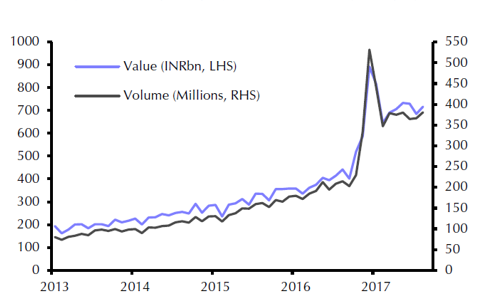 The ‘financialisation’ of Indian savings

Historically, some 30% of Indian GDP has been in savings – typically gold and property – but demonetisation and the Aadhaar scheme are, together, encouraging these savings into the financial system. Moreover, this environment of plentiful liquidity is driving down funding costs for lenders and spurring the fees of businesses related to asset management, which is supportive for the Indian financial businesses held by our strategies.

Around 60,000 mutual fund accounts are being opened every day in India, and Indian mutual funds have almost doubled their assets under management (AUM) in just over three years (see the chart below).

The chart below shows how the Indian mutual funds market has gone through three distinct phases over the last 13 years, with compound annual growth rates (CAGR) improving markedly over the last three years, on the back of higher market returns and stronger flows following demonetisation last November. 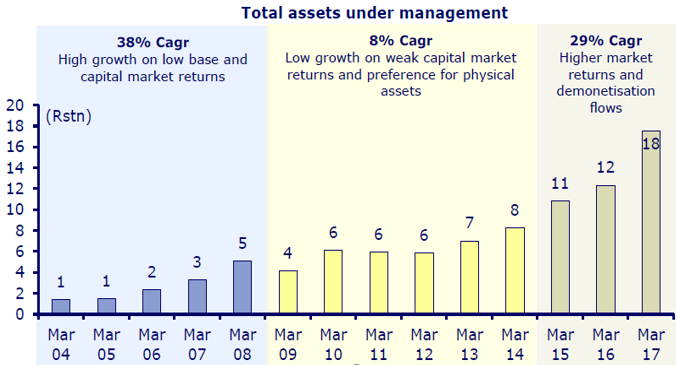 Given that the penetration of mutual funds in India as a proportion of GDP is less than a quarter of the global average, and below that of many other emerging markets, we believe there is a long ‘runway’ for growth in this area (see the chart below).

UK Budget: a lot to be modest about

Can China sustain its positive momentum in the Year of the Dog?

Increased infrastructure spending in India could be good news for investors.