The post-financial-crisis years have been coloured by an ongoing debate around whether the world economy is destined for inflation or deflation. The acceleration of the global economy in 2016 has given renewed belief to those arguing that a return to inflation is likely.

The parameters of this debate are almost always restricted to the prices paid for goods and services, specifically those that have been deemed worthy by the government-employed economists to include in consumer price index (CPI) baskets.

Since the financial crisis, we see central banks as having engaged in the abuse of money, printing vast quantities in a bid to realise CPI inflation. But this desired CPI inflation has remained stubbornly conspicuous by its absence. Central banks’ actions have however succeeded in inflating financial and real asset prices the world over. To our mind, this has encouraged the misallocation of capital, increased balance-sheet instability, and contributed to wealth inequality that is no doubt contributing to the political upheaval through which we are currently living.

But the question that is preoccupying investors currently is whether we are about to see an acceleration of CPI-measured inflation.

If we are to see a sustained acceleration of CPI inflation, it will require acceleration pick-up in private-sector loan growth via the banking sector – particularly loans to households to fund consumption.

In the wake of the financial crisis, bank lending growth has been persistently weak, even contracting in the aftermath of the crisis as households and banks deleveraged to improve the health of their balance sheets. The lack of private-sector credit growth is likely to have been a result of both a lack of supply and a lack of demand for credit.

There is evidence to support the idea that the US banks have completed the process of balance-sheet resolution and are now meeting the demand for credit. This is reflected in the acceleration of loan growth since the middle of 2015.

However, in Europe, lending growth remains anaemic, reflecting the fact that the European banking system is still some way from completing the process of balance-sheet resolution. While broad money growth has accelerated, this is predominantly the result of European Central Bank (ECB) money-printing. Private-sector loan growth remains at a level that suggests a sustained rise in inflation is not on the cards (see chart below). 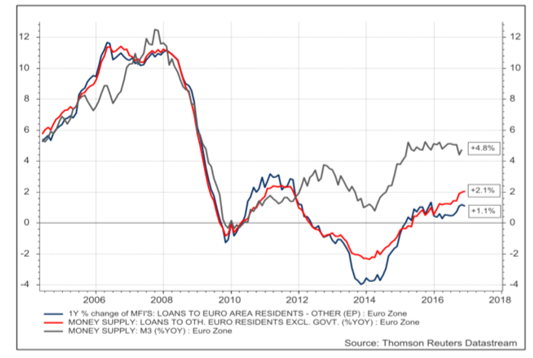 In the UK, the process of bank balance-sheet resolution does appear to be further along the path. The big four banks have stopped shrinking their balance sheets and loan growth has accelerated, suggesting that a rise in inflation is possible (see chart below). 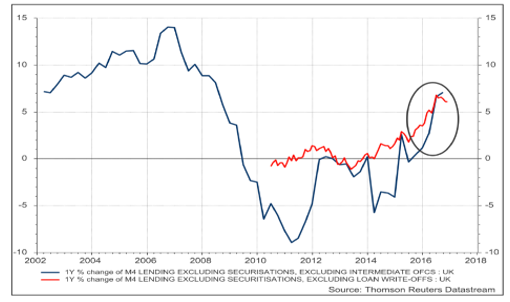 However, stepping back and looking at the big picture, economies the world over remain constrained by high levels of debt. As the quantum of debt increases, higher leverage magnifies the sensitivity of the real economy to changes in interest rates. The shift higher in global interest rates as the economy accelerated in the second half of 2016 has already begun to weigh on loan growth which, in due course, should lead to softer economic activity and curb inflationary pressures.

Is an ‘Italexit’ on the cards?

A continuing budget dispute is leading to renewed speculation over an Italian exit from the EU.

Turkey and Argentina are adopting radically different approaches as they attempt to remedy their economic ills.

As the March 2019 deadline approaches, the chances of the UK and EU reaching an agreement are in…