Globally, the middle class is rapidly expanding, creating a huge demographic shift that is highly relevant to our ‘population dynamics’ investment theme. This is being driven both by population growth and by rising GDP per capita, which means that increasing numbers are joining the ‘middle class’[1] – defined here as those earning US$10-100 per person per day in 2005 US dollars, which equates to a US$14-140k household income per year in today’s terms. The growing middle class is being seen primarily in emerging markets, which is unsurprising given that between 2016 and 2050 emerging markets are likely to account for 90% of the growth in global population. By 2050, 12 of the 13 most populous countries are forecast to come from the developing world, as seen below. 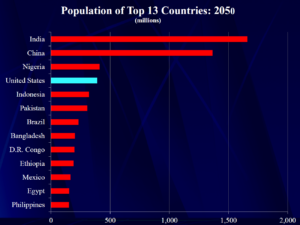 As shown in the chart below, India and China are two key hotspots of growth, with China overtaking the US in middle-class spending in 2016 (in purchasing-power-parity terms). It is, however, important to note that the reduction in US and EU middle class spending is owing to the number of individuals moving from ‘middle class’ to ‘rich’ rather than falling out of the middle class. 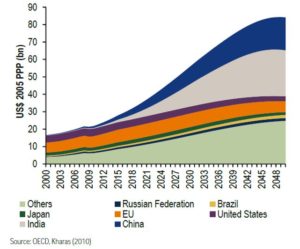 In terms of specifics, those moving into the middle class are increasingly young (with 61% being under 30), urban, educated, connected and spending more on education and health care. These demographic markers also contribute to our picture of the new middle-class members, and inform where they are likely to be spending.

The greater connectivity of the new members of the middle class is likely to accelerate growth further owing to greater penetration of technology in developing countries, as improved information and communication technology is crucial for modernising business and finance practices. It also allows personal banking to reform, with many countries now seeing an increase in GDP moving through biometric smartphones.

We have an interest in the middle class as there is a significant increase in the proportion of their discretionary spending to their income, when compared to working-class individuals. This results in people spending comparatively more on leisure and entertainment, non-essential food and drink like wine and tobacco, and telecommunication devices and services.

Spending map for ‘low-income and hardworking’ group (US$4,000 approximate per capita spending) 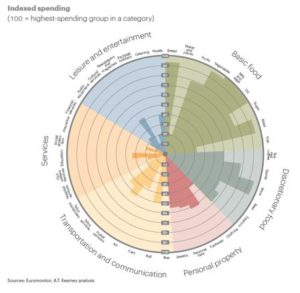 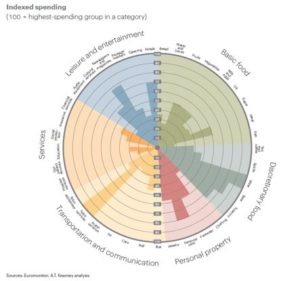 The huge amounts of GDP that are forecast to be spent in these areas in the future are likely to be of great interest to companies and therefore to investors. Consumer goods – both goods and services – are likely to see an uptake in purchases, and there may also be a shift from export-led economies to domestic-driven growth. It’s also possible that middle-class growth may have an impact on the relative growth rates of different countries. These are all considerations that would affect investors. There are also broader implications of the growing middle class, including that the carbon footprint per person is set to rise, while the greater migration from rural areas to cities will necessitate investing in more infrastructure. There will also be higher spending on education, and an associated fall in birth rate for countries to contend with in the future, which may also influence investment decisions in the future.

While this may paint an exciting picture of GDP growth and increased discrentionary spending, there are barriers to the growth of the middle class. Rising income inequality may mean that growing GDP remains concentrated with the rich. The required rise in productivity to accompany the rising GDP per capita depends on proactive government policy to deregulate the labour market and increase competition, which may or may not materialise. These factors could impede the growth of the middle class and associated increases in spending, although the population will be rising steeply regardless, suggesting that even if the middle class does not reach the peak forecast rate there will still be significant growth.

The expanding middle class is an exciting trend in population dynamics, as it has the potential to affect so many sectors and products. This is an important area to track over the coming years as there will be inevitable investment implications of so much more discretionary spending.

Heads together: in pictures

15 snapshots of our 2016 investment conference