At Newton, we are predicting the end of the road for the internal combustion engine as electric vehicles (EVs) gain traction.

It’s good to be green

First there is the environmental angle. EVs are greener than current mass-market vehicle options, and as countries continue to implement their Paris Climate Accord commitments, the question of carbon dioxide (CO2) will become ever more important. Similarly, an increased regulatory focus on nitrous oxide emissions and fine particulate matter is unlikely to abate in the wake of the Volkswagen scandal. 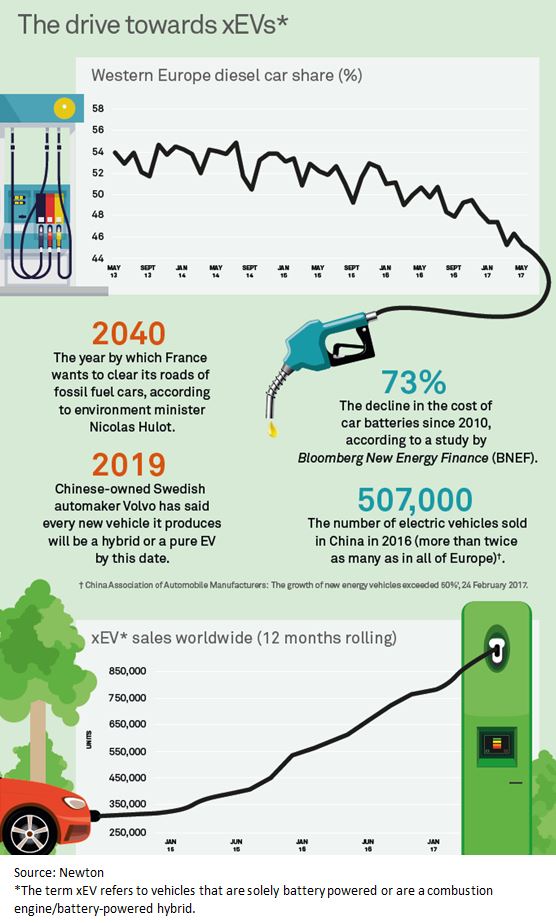 The European Commission (EC) has laid out plans not only to tighten emissions testing for automakers, but also to ensure far higher penalties for companies that fail to make the grade. As of 2019, levies will take the form of a €95 fine per CO2 g/km above the limit for each vehicle produced if the average fleet emission breaches targets. For a company like Volkswagen with 3.65 million units sold in Europe in 2016, even just being three grams above the EC’s emissions target would translate into a €1bn fine.

If EV disruption is going to happen, it needs a lot more charging stations and standardised access points to help address ‘range anxiety’ – fears of limits on battery life.

Indeed, automakers and regulators are putting in place the infrastructure to prepare the ground for an EV future. In Europe, a consortium of German carmakers has agreed to build a network of fast charging stations along the country’s highways. Meanwhile, in the US, the Department of Energy has offered up to $5.5bn of loan guarantees to support the commercial-scale deployment of EV charging facilities.

Crucially, companies across the globe have also cooperated on the standardisation of charging system plugs, meaning a one-size-fits-all approach for motorists needing to charge their cars.

We also think electric vehicles offer numerous benefits over petrol or diesel engine cars. For one thing, they have fewer moving parts, which makes them far more reliable and cheaper to maintain. They are also potentially safer and, as anyone who has test driven a Tesla can testify, they can offer a fun driving experience, with 100% of torque (rotational force) available at 0rpm.

As the infographic shows, all this activity is beginning to translate into sales, with a year-on-year increase of 45% in EV sales between 2015 and 2016. However, despite this momentum, a word of caution: government subsidies are still necessary.

Here too there are signs of progress. Germany, for example, has established €1.2bn of EV incentives, which include a 10-year exemption from vehicle tax, as well as tax breaks to employers for setting up battery chargers for employees at the workplace. China’s 13th Five-Year Plan has a target of five million EVs on the road by 2020, and Norway has committed to a target of zero new fossil-fuel cars sold after 2025.

With rising sales, new models and supercharged investment, in our view it’s not a question of if, but when, EVs overtake their fossil-fuel counterparts – but how should investors respond? Certain companies might be magnificent for generating great headlines around EVs, but headlines do not necessarily create investment returns. We also expect it to be tough for original equipment manufacturers (OEMs) to differentiate themselves in the EV world. It is therefore difficult to bet on one particular name, as the space is likely to be overcrowded and market shares very volatile.

Currently, we see better opportunities ‘upstream’ and ‘midstream’ in the basic materials and technology providers the OEMs will need to create the EV revolution. These include semiconductor manufacturers, battery manufacturers and the companies which produce the lithium needed for EV batteries.

At the heart of the process

Mathieu is a global research analyst specialising in the automotive sector.