2017 was a lively year for oil markets, and the volatility has continued into this year. Various geopolitical issues, decisions from OPEC (Organization of the Petroleum Exporting Countries) and unpredictable storms in the US all affected oil prices, with price per barrel ranging between about $45 and $74 per barrel over the last 12 months (peak to trough). 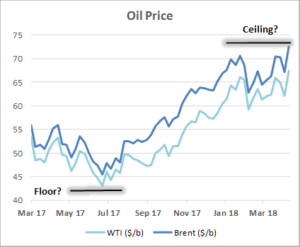 Looking forward, another major factor that could affect oil prices is technological innovation, especially advances aimed at minimising environmental damage. Electric vehicles (EVs) are at the intersection of technological improvements and environmental activism, making them an exciting prospect for many. However, EVs are run without using fossil fuels. This may lead many to conclude that an EV revolution could have a marked negative effect on the oil industry. But is this the case?

Many believe that the bulk of oil demand comes from the transportation industry. However, analysis of world oil demand reveals that light-duty vehicles – comprising primarily of smaller vehicles used for personal transport –occupy only around 25% of global demand. 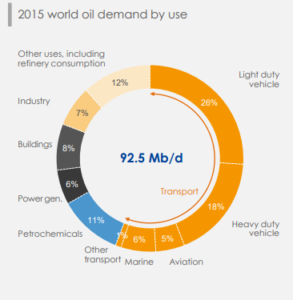 EVs are intended to replace light-duty vehicles, limiting potential demand growth to this area. While other types of transportation – namely heavy-duty vehicles, planes, trucks and ships – also contribute to oil demand (another 25%), there are currently no viable electric versions of these forms of transport, so the need for oil in this area is unlikely to change in the near future. Furthermore, the bulk of oil-demand growth is set to come from petrochemicals, power generation, construction, industry and a variety of other, smaller uses. Transportation is only one part of oil demand, and light-duty vehicles in particular are a smaller part still of that total.

Even in the case of aggressive penetration, forecasts predict that EVs may only make up 32% of global light-duty vehicle transport by 2040. 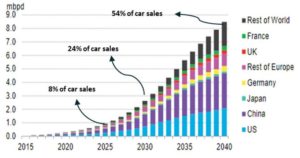 At the same time, this scenario doesn’t necessarily equate to declining oil demand for light-duty transportation, let alone to declining total demand; however, should oil demand disappoint, there will clearly remain the need for plenty of oil to serve the large number of traditional cars still in use. It is also the case that EVs tend to be used in urban settings, which means that they are likely to drive fewer kilometres than their petrol and diesel counterparts. This suggests that while EVs may reduce the number of petrol cars, the remaining oil-fuelled vehicles are likely to clock up greater mileage and therefore require a comparatively larger amount of oil-based fuel, further reducing the impact of EVs on oil demand. In fact, a bigger factor affecting demand growth is likely to be the pace of engine-efficiency gains (i.e. energy consumed per mile travelled), something that has been offsetting oil-demand growth for some time.

It also remains to be seen how the world will power this expanding fleet of EVs. While it is unlikely oil will play a material role here, there could be an opportunity for natural gas, an area many oil companies have been consciously growing within their portfolios. The ultimate intention is that the power needed to charge EVs will come from renewables, but realistically there are some infrastructural challenges, particularly if there is strong take-up of EVs. Natural gas can help bridge this transition, while being more environmentally friendly, especially compared with coal.

From oil to energy

While the analysis collectively suggests that EVs could decrease oil demand over the long term, this reduction is not likely to be as pronounced as many would intuitively expect. It seems quite likely that oil will play an integral role in the global energy infrastructure for some time. However, a general push for renewable-energy sources, of which EVs are only one part, means that oil companies may be coming up against more challenges as the years continue, particularly should public scrutiny grow. Oil executives need to be assessing where the industry will be in ten years and beyond, while strategically positioning themselves for this technological revolution and global fight against climate change. As energy consumption becomes increasingly more electrified and greener, it may be prudent for oil companies to move towards becoming ‘energy companies’ in the long term, managing a portfolio of renewable assets and power-generation capacity, alongside fossil fuels.

As ever, the future is uncertain, but it is becoming increasingly apparent that, in order to meet the objectives of the Paris Agreement (keeping temperature increases this century below 2˚C), strong government policy is likely to be necessary to drive change, which could result in the introduction of carbon taxes. Therefore, those companies preparing their business models today for this scenario may benefit strategically over the longer term, while growing a more stable (less cyclical) business division as well.

Laura is a global research analyst specialising in the oil & gas sector.

Fresh air and the Big Smoke

While China, Denmark and Norway are moving in the right direction, the US appears to be in reverse.