Financialisation is one of our key current themes, and an idea I think is both underappreciated and misunderstood.

Financialisation is an unintended (but inevitable) consequence of using financial assets as the main monetary policy tool. Persistently cheap money incentivises the use of credit, leverage and financial engineering over other – often more productive – behaviour.

‘Finance’ in its broadest sense has increasingly come to dominate rather than serve the real economy; the tail now tends to wag the dog.

In academic (including central-bank) models, growth and innovation in finance tends to be associated favourably with what is called ‘financial deepening’.

Such models do not tend to see bubbles emerging (in theory they shouldn’t exist), and failed to identify the last one, in the lead-up to the financial crisis. Central bankers tend to believe that, as long as they look after price stability, financial-market stability should look after itself, although we see no evidence for this assertion.

Financialisation manifests itself in all sorts of ways. For many years, it was mainly visible in the growth of banking-sector assets and derivatives; more recently it has been seen in the expansion of non-bank (or shadow-banking) credit mediation, such as corporate credit markets, structured finance vehicles and alternative asset management generally. Financialisation also encompasses the increasing availability of financial assets, vendor financing and financial engineering to individuals, households and non-bank corporates.

This FT article, http://on.ft.com/1TUofuT, gives an excellent account, and highlights that companies are being incentivised to become financial organisations.

China seems to lead the world in terms of financialising many aspects of its economy and creating a vast pool of speculative capital searching for yield. As in the kids’ game ‘Whack a Mole’, shutting down one speculative frenzy simply causes the leverage to flit to another (e.g. real estate to credit instruments to the stock market to commodities, and back to credit etc.). Like most things about China, the numbers boggle the mind. See, for example, The World’s Most Extreme Speculative Mania Unravels in China at http://www.bloomberg.com/news/articles/2016-05-09/world-s-most-extreme-speculative-mania-is-unraveling-in-china

What has particularly interested us is financialisation at the asset-class level and its implications for liquidity and volatility.

Real assets, from commodities to real estate, have become visibly more financialised. In much of the world, as the chart below illustrates (2013 is the most recent full year for which all data is available), paper trading in derivative contracts on underlying commodities dwarfs the physical tradable inventory and/or annual production many times over. It’s a similar story in terms of financialisation of financial instruments such as foreign exchange and interest rates. Across all these areas, extreme positions can create extreme volatility. 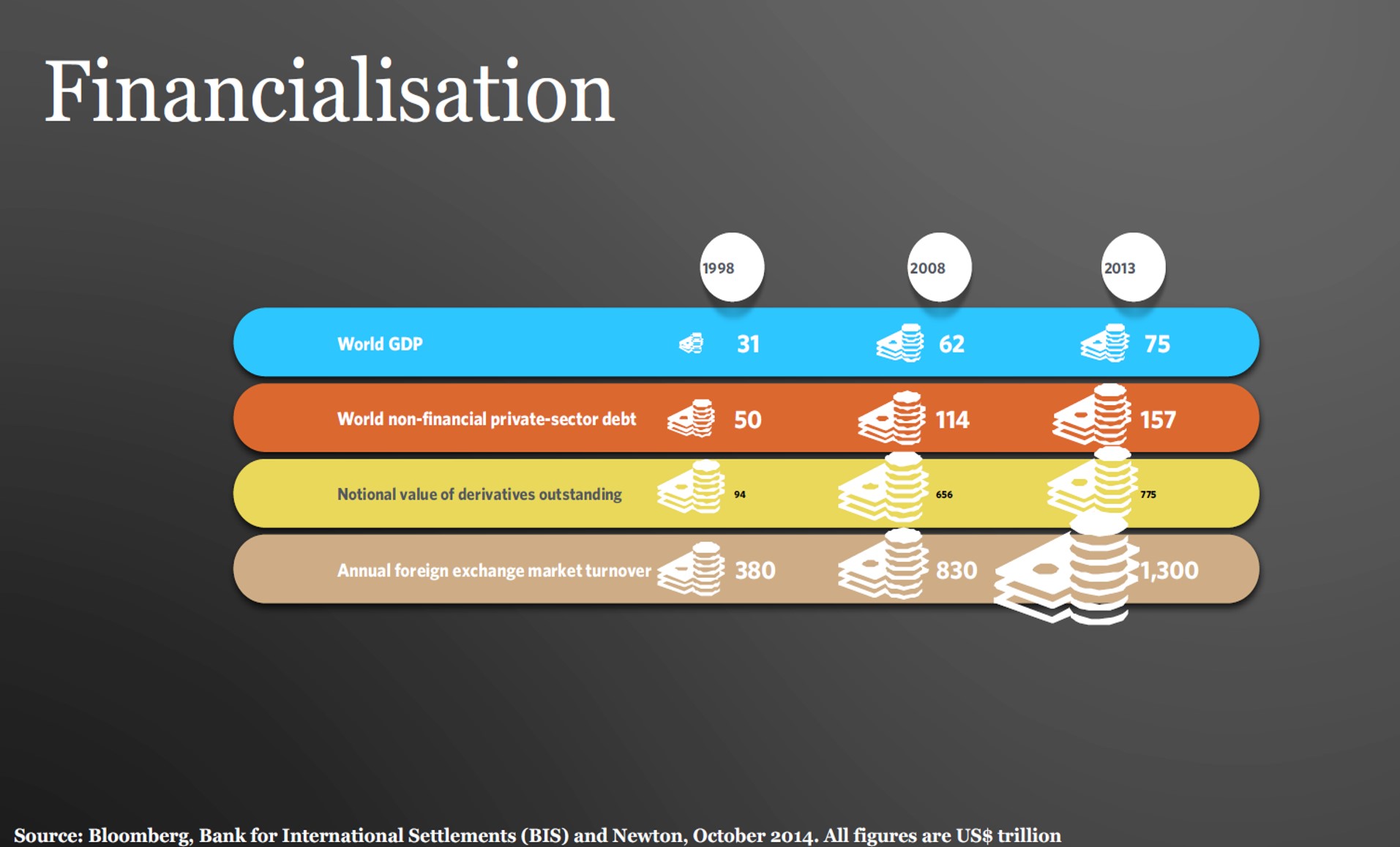 A central thread of our financialisation theme is the idea that a unit of GDP seems to require ever-increasing units of debt. In the current cycle, emergency monetary-policy settings prevented a deleveraging cycle in the developed world and encouraged an aggressive credit cycle in the emerging economies, such that the world’s aggregate liabilities have grown by over 40% since 2009.

How much would aggregate debt need to increase in the next decade if current trends in economic growth and leverage are to be maintained?

More importantly, perhaps, how could such further credit expansion be created given banks’ reluctance to lend in a highly regulated world, in which net interest-rate margins are low? The answer is likely to be more money-printing and government involvement in capital allocation (aka ‘helicopter money’).

In the last cycle, financial innovation saw the proliferation of highly leveraged structures such as collateralised debt obligations. The financial alchemy involved pooling, slicing and subordinating underlying debt assets, by which sub-investment-grade risks (mostly in the mortgage market) could be transformed into investment-grade credits by dint of packaging. In the latest cycle, the big borrowers have been western and emerging-market companies and governments, rather than US households. Sub-investment-grade borrowing has ballooned, and covenants have loosened in the usual way.

Wall Street is still adept, we think, at creating silk purses out of sows’ ears. Hot off the press is Dell’s bond issue – to fund its $67bn purchase of EMC. The current appetite for yield is such that the deal built an $85bn book of interest for a $16bn (subsequently raised to $20bn) issue. It seems remarkable that Dell, a sub-investment-grade issuer, could, via clever engineering, offer one of the biggest investment-grade deals of the year!

In theory, it seems like a great idea to take a range of relatively illiquid credit (such as emerging-market or sub-investment-grade corporate debt), pool it for diversification of risk, and sell units to individuals who ‘require’ a return higher than that available to them on deposit or in domestic sovereign bond markets.

Our concerns are twofold.

First, the liquidity afforded by today’s constantly traded or daily priced investment vehicles may be more apparent than real, particularly in a stressed environment. Despite the huge growth in financial markets, the numbers of market-makers prepared to hold inventory has shrunk markedly.

Secondly, and perhaps more importantly, we see policy as having set up a rather myopic hunt for yield, which has led investors to migrate into risk without necessarily understanding it. Many of the more modern structures in today’s asset management landscape have been created to accommodate this displacement. As we’ve said many times before, if investors were to suddenly decide to return to their natural habitat (such as cash), the exits would be likely to prove rather narrower than the entrance was. This could lead to significant price volatility, leading even the standard assumption of almost all investment strategies – that markets will remain liquid and continuous – temporarily to be undermined.

What would be the catalyst for a retreat from risk assets? The consensus believes that there will not be a proper bear market without a recession, and that we won’t get a recession without the monetary authorities (in particular the Federal Reserve) raising rates. With low inflation, aggressive rate rises are out of the question, which apparently entails no risk of recession; and, against this backdrop, as government bonds yield so little, stocks are seen to be the only game in town.

Our feeling is that this cycle is long in the tooth. A downturn in corporate profits and cash flows, combined with rising credit defaults, could be enough to tip economies, and thus cause a move back into safe havens and ‘risk-free’ bonds, even at low yields.

In this context, it’s key to understand why government bonds have such unattractively low yields. It’s fashionable to see current bond pricing as a bond bubble caused by central-bank buying.

For their part, the central bankers would say that they are not responsible for low bond yields. For once we would agree (although for different reasons!). If it is the case that bond yields are where they are mostly because of economic weakness, that’s hardly the best reason to take more risk in ‘growth’ assets.

It follows then that quantitative easing has changed investors’ attitude to risk in an environment where they might normally have become increasingly (and rightly) cautious. In order for policymakers’ gambit to work, economic growth does need to pick up to justify having encouraged the investing and saving communities to change their risk appetite. We do not think this is likely in the near term.

What do you buy the ‘Chairman of Everything’?

Iain is a member of our Real Return team. He joined Newton in 1985, and specialises in the management of relative and absolute return multi-asset mandates.