This week, in our economics, geopolitics and demographics theme group we discussed a topic which is rarely out of the news: global migration. We looked at the potential impact on politics and economies around the world, and of course the key considerations for investors. I’d like to share some of the main points here on the blog, with a particular focus on Europe.

Two of our themes are particularly relevant here. ‘Divergence’ highlights the growing differences in the economic and political landscape within countries and regions, and most pertinently for this topic, the rise in anti-globalisation, anti-immigration sentiment which has recently manifested itself in the UK’s vote to leave the European Union (EU) and the election of President Trump in the US. Second, ‘population dynamics’ focuses on how demographic trends such as ageing populations may affect economic growth potential and fiscal burdens.

No more migrants, but refugees are on the up

While the number of migrants is relatively stable relative to recent decades at 3.3% of the global population, forced displacement is at its highest since World War Two. At the end of 2015, 65.3 million people (that’s equivalent to the population of the UK!) were displaced, up from 59.5 million just 12 months earlier. This is the first time that the 60 million threshold has been crossed. Measured against a global population of 7.349 billion, this means that in 2015 one person in every 113 was forced to leave their homes as a result of war, persecution or natural disaster.[1]

Why has the number of refugees risen so dramatically? According to United Nations (UN), conflicts are lasting longer, and we’re seeing new conflicts arising more frequently. This can be seen in changes to the pattern of flows of migrants. As the charts below demonstrate, between 2000 and 2010 it was the journey from Mexico to the US which saw the most migrants. However, between 2010 to 2015, the havoc wrought by the Syrian conflict is clear, with a large number of migrants all leaving Syria to arrive in Turkey, Lebanon and Jordan. 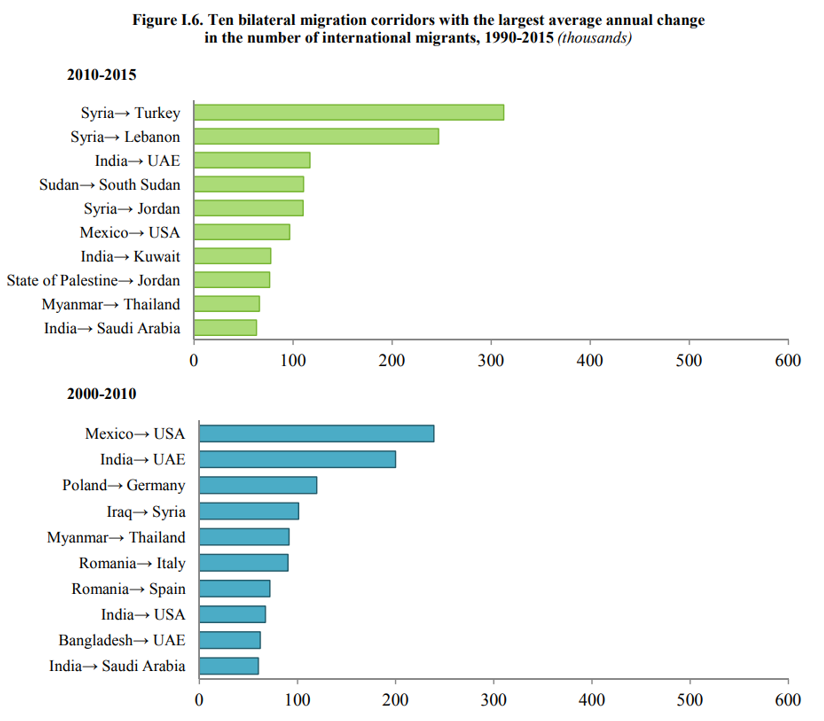 In addition, the rate at which solutions are being found for refugees has been falling since the Cold War, making integration a serious concern for many countries.

Political treaties can also significantly alter migration routes and change the countries which have to bear the brunt of the refugee crisis. The treaties between Turkey and the EU[2] serve as an example of this, putting huge pressure on Italy as migrants turn away from Greece as a route into Europe. As a result of these treaties, in 2016 Greece saw its number of arrivals fall from 857,363 in the previous year to 176,906, a 79% decrease. The reverse occurred in Italy, whose arrivals increased from 155,842 in 2015 to 181,436 in 2016 – a vast number when you consider the country only has capacity for 1,600 across four centres.[3] EU leaders have called for further action to stem the flow of migrants from Libya to Italy, but as yet no conclusive agreement has been reached. Italy itself has enforced a code of conduct for non-governmental organisations (NGOs) operating rescue ships in the Mediterranean which requires them to bring migrants to shore rather than to the nearest boat.

What are the likely economic and political consequences for Europe?

In economic terms, with an ageing and declining population, Europe could certainly benefit from immigration. It has been estimated that for the EU, with a working-age population of 220m, adding 1m more immigrants a year could increase GDP by 0.2% each year.[4] Germany, for example, needs 700,000 people per year (or 0.9% of the population) in order to prevent a working population decline. The broad theory is that accepting migrants will cost in the short term, but over a longer period will ultimately be beneficial for an economy.

However, integrating immigrants into society is a far from simple task, especially when you consider that over 20% of Europe’s refugee population are children.[5] In Germany, a poster child for integration, only 9% of refugees that arrived in 2015 have found a job, while 50% are in training programmes. The German minister for immigration recently predicted a period of long-term unemployment for the country’s refugees, admitting that he expects only 25-33% of newcomers to enter the labour market in the next five years.[6] In Italy, where the unemployment rate is far above that of Germany (3.9% vs. 11.1%[7]), finding jobs for migrants is likely to prove even more of a squeeze.

It is also important to note that non-EU migrants represent perhaps only circa 0.19% of Europe’s population, and as such, despite the doom-mongering of far-right political groups, it is hard to believe the economic impact will be so big.[8] 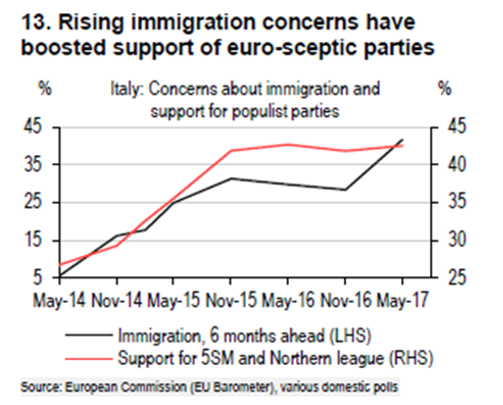 Politically, we expect the impact to be far greater. The chart on the right shows the rise in popularity of populist parties in Italy as concerns about immigration have crept into the forefront of people’s minds. It is important to note that the far right has gained this support even during a period of relatively good economic growth, revealing the inequality in the progress of the Italian economy and the frustration of those who feel they have been left behind by prosperity. Immigration has a disproportionate impact on the lower-skilled end of the labour force, and it is this group which are most likely to feel sympathy with the anti-immigration, anti-globalisation messages of the far right. While the anti-EU, anti-euro Five Star Movement is unlikely to be victorious in next year’s Italian elections (with a Democratic Party coalition seen as the most likely outcome), recent opinion polls suggest that the party is set to receive the largest share of the vote.[9]

Whatever border controls or other prevention methods countries may put in place, migrants will always find new routes. As such, we expect the refugee crisis to continue to exert pressure on spending and politics, leading to further volatility in the eurozone. From a macroeconomic perspective, additional fiscal spending to provide the necessary support to incoming migrants could provide a short-term boost (especially in Germany and Italy), but the longer-term effects on GDP will ultimately depend on the success of integration and the number of migrants who become employed.

From an equity-market perspective, we expect further political volatility to continue to hinder the performance of European domestic cyclicals, but we are also considering potential opportunities in businesses which are involved in border infrastructure, government IT solutions and training and education.

[2] In November 2015 the EU struck a deal with Turkey to try to control the flow of migrants to Europe. Turkey received €3bn in return for tightening its borders and keeping refugees in the country. In March 2016 another agreement was reached whereby all irregular migrants crossing from Turkey into Greek islands from that date would be returned to Turkey.

[7] Eurostat, Bureau of Labor Statistics. Figures as at April 2017.

Much ado about nothing