As former US Vice President Al Gore said to the 1,200 delegates at the UN Principles for Responsible Investment’s (PRI) annual conference, which Newton attended in September, “human nature makes us vulnerable to keep doing the same things. But wisdom helps us recognise when we need to change.” The conference’s record-breaking attendance indicates that while this need for change is widely acknowledged in the investment community, the question which still needs to be answered is “how?”

In his keynote speech, Mr Gore, now as famous for his work as a climate-change crusader as for his former political office, described the sustainability revolution as the single largest investment opportunity in the history of the world, retaining the momentum of the industrial revolution but with the speed of the digital revolution. The tale of a coal museum in fossil-fuel-heavy Kentucky installing solar panels was a story of two unexpected technologies colliding, and offered a powerful example of the old world embracing the new.[1]

As Gore said, “business and sustainability go hand in hand. The only missing ingredient is political will, and political will is in itself a renewable resource.” This will was in plentiful supply throughout the conference, the largest gathering of global PRI signatories yet.

Not unexpectedly, climate change was a dominant concern, given that it has been cited as the number-one threat to the global economy by the World Economic Forum for the second year in a row. A number of speakers warned us that, unlike the financial crisis, we can’t say that we didn’t see it coming and didn’t have time to prepare.

The PRI’s annual survey collected climate-change data from a number of investment managers and asset owners on efforts ranging from policy intervention to the use of emissions data in the investment process. As is clear from the chart below, while the numbers of owners and managers taking active steps in this area may seem small at present, there is a noteworthy increase in activities versus just a year ago. 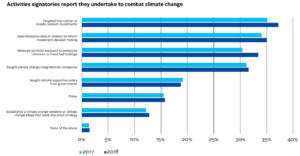 At Newton, we too are strengthening our own efforts, and will shortly be issuing a report in line with the Task Force on Climate-related Financial Disclosures. Our next steps will be to undertake further work to enhance this, including more extensive scenario analysis to help us identify climate-related investment risks and opportunities.

When responsible investment was a far less familiar concept, the phrase ‘fiduciary responsibility’ was a common excuse not to implement environmental, social and governance (ESG) considerations into an investment process owing to the risk it might hinder returns. However, as investors have come to appreciate the value of ESG in identifying risks and opportunities not seen in a company’s financial reports, this concept has now been turned on its head. At this point, if you don’t integrate ESG factors, it may be seen as violating your fiduciary responsibilities, which are now accepted to go beyond financial measures.

This has led, we believe, to a lot of bandwagon jumping, with many simply buying in third-party ESG data, calling it ESG integration and signing up to reputable organisations such as the PRI to lend themselves credibility.

At Newton, where we have a long-established process of in-depth company analysis, engagement and voting, working side-by-side with our portfolio managers and fundamental analysts, we do not believe this counts as truly integrated ESG.

Neither does the PRI.

This year the PRI announced it would be implementing minimum requirements for signatories to ensure that membership remains meaningful. It does not want to simply delist the laggards and move on, but to get them moving on responsible investment. These requirements include an obligation that at least half a fund manager’s assets be covered by a responsible investing policy, as well as for there to be explicit commitment to the issue by senior managers. Failure to meet these requirements by 2020 will result in delisting, and so far the PRI has contacted 174 organisations (of a total of nearly 2,000 signatories) who are at risk.

While we do not doubt that the growth of the PRI is a result of meaningful progress rather than fashion-following, we welcome this change to ensure membership does not become superficial, but that signatories continue to be dedicated to advancing responsible investment globally.

As ESG grows in adoption globally, it has expanded beyond its traditional equity focus. Fixed income, in particular, is starting to catch up. According to the PRI’s annual survey of investment managers, 75% now incorporate ESG factors in screening and integration strategies in fixed income. Further to this, almost 40% of the PRI signatories’ assets are bonds.

A panel session at the PRI conference dedicated to ESG integration in fixed income explored some emerging practices. The moderator started with a poll of the room – did people carry out their own ESG analysis or did they buy it from an external provider? The vast majority of people were in the latter camp. At Newton, by contrast, our credit analysts undertake proprietary ESG research (informed by external analysis) in conjunction with our responsible investment team.

As more investment managers seek to bolster their process with ESG analysis simply bought in from third parties, we hope that this proprietary work enables us to identify issues which have been misjudged or missed by the wider market consensus, and truly integrate this information into our investment theses.

The conference panel also discussed the pitfalls of assuming what works in equities will necessarily work in fixed income. While the issues considered are likely to be very similar, often they should be seen through a slightly different lens. One example of this is the fact that governance standards in private companies will often look very different to those in the public markets. Another is that the disclosure requirements for private companies are far less than for their public counterparts. However, a lack of disclosure doesn’t necessarily mean a company has a poor ESG profile (as many ESG research providers would assume), but instead highlights the importance of engagement in order to see the full picture.

Lottie is a responsible investment analyst.

Charities have been on a rollercoaster ride with the investment returns from their portfolios.

Our responsible investment team report back on events over the second quarter.