In addition to being the world’s second largest economy, China is also set to account for 35% of global growth over the next two years, according to the latest forecast by the World Bank.[1] However, the country is also plagued by structural challenges, most notably the uncomfortable legacy of a massive state-inspired credit expansion in the wake of the financial crisis. As such, the country is attempting a tricky transition from a credit-fuelled growth model that is overly reliant on investment to one more driven by private consumption and services.

So what’s next for China? Can it successfully make this transition, or are we set to see a sharp down-cycle for the country? I recently provided an update to Newton’s investment team on my macroeconomic outlook for the country, and I’d like to share a few key points here. 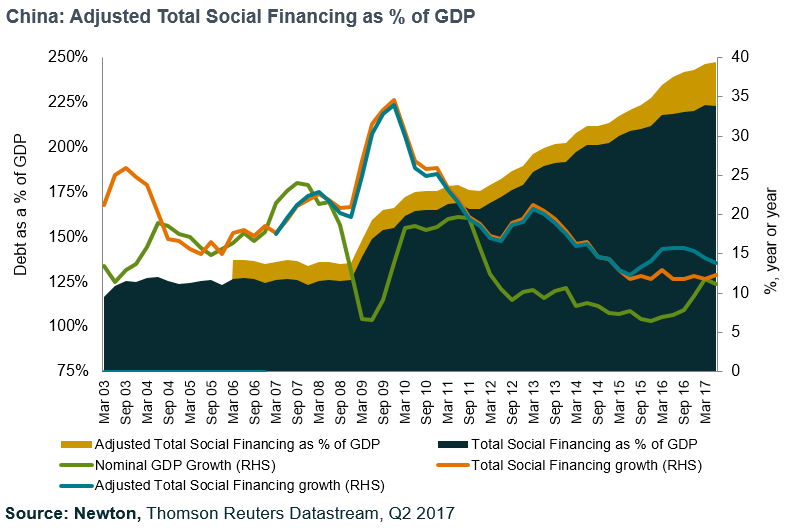 While China has had some success in slowing down credit growth, the country’s debt ratio, as represented by adjusted total social financing as a percentage of GDP, continues to ramp up. This is now sitting at c.250% of GDP, which isn’t that unusual when compared with developed countries, but is very high for the emerging world. More worrying is the rate of increase, having risen by an unprecedented 110% of GDP since 2008. Past episodes of extremely rapid debt growth in other countries have frequently gone hand in hand with financial crises further down the road.

However, China does appear to be making some headway in rebalancing its economy. Growth in the manufacturing and construction sectors has declined meaningfully in recent years, yet the services sector has maintained its double-digit growth rates even as the broader economy has slowed. The vigorous growth seen in the e-commerce sector has played a notable role in this. Equally, while employment in secondary industries has declined since 2013, according to National Bureau of Statistics data, this has been more than offset by jobs growth in the services sector. 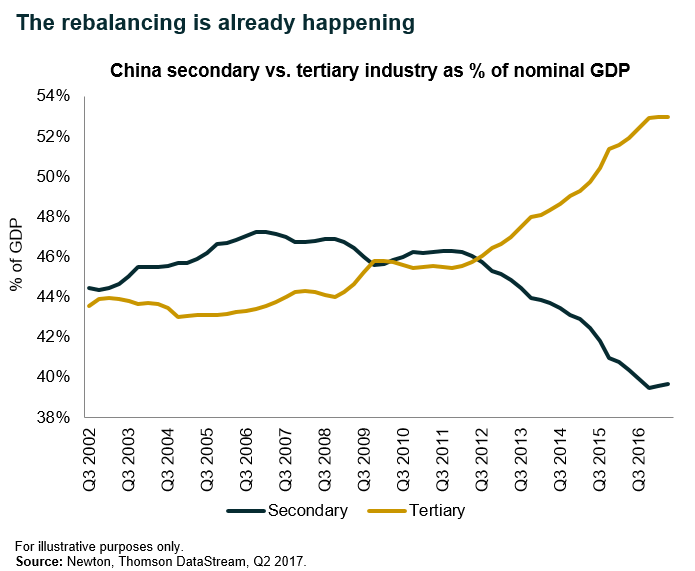 After the authorities removed all house-purchase restrictions and twice aggressively cut the down-payments required for residential mortgages, we saw the housing sector bounce back strongly from the second quarter of last year. This was done to counter a sharper-than-desired economic slowdown in late 2015/early 2016. As growth regained some momentum, house-purchase restrictions were again reintroduced to control rampant house-price growth, but this time on a city-by-city basis. This was followed by tightening of lending criteria by banks, and house-price and residential-sales growth has predictably slowed as a result. While house-price growth remains positive at present, it is steadily slowing, and we expect this trend to continue. 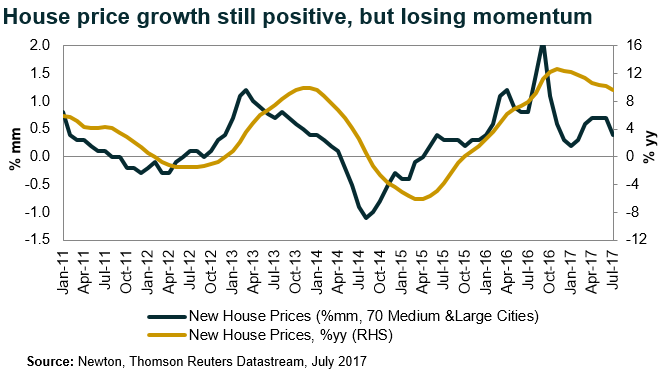 We expect growth to slow in the coming quarters in response to the weakening housing market, as well as slowing credit growth and tighter monetary conditions. Given how much industrial commodity prices have risen this year, which in our opinion has been at least partially driven by the upside surprise to China’s growth uptick this year, we would expect these to correct lower in sympathy as growth slows.

China’s medium-term outlook remains clouded, owing to the nature of its rapid debt build-up, and it remains unclear how the dynamic between cooling credit growth and supporting GDP growth will unfold. The good news is that China’s economy is gradually but demonstrably rebalancing towards a growth model that is less reliant on investment, with new industries coming to the fore.

Our base case is for China to continue to slow down structurally, with growth being supported as necessary by the authorities as they manoeuvre policy settings to bring this about gradually. We believe this could provide an opportunity for investors to gain exposure to companies benefiting from China’s rapidly expanding services industry and fast-growing middle class. We remain very cautious on banks given the probability that asset quality becomes more problematic as the cycle continues.