Changing the state of play

‘State intervention’ has been a theme at Newton since 2011, and in its previous guise as ‘more government’ and ‘uneconomic growth’ for significantly longer. It continues to be a hot topic of discussion on our investment floor, and was the subject of our global investment meeting on Monday. At these meetings, members from across our investment team gather to hear a presentation on subjects ranging from debt burdens to driverless cars, before the floor opens to questions – and of course the ensuing lively debate!

Stating their claim
Following the financial crisis of 2008, we have seen extreme monetary policy intervention in markets as authorities have sought to counter global deflationary pressures and weak growth. While we expect this to continue (and potentially to become even more extreme and intrusive as the years go on), a new wave of state intervention in the corporate sector is also on the rise.

There are a number of potential causes of authorities’ ever greater interest in corporate life:

One way to demonstrate this is to look at some of the largest corporate fines over recent years (see below). With these fines likely to be detrimental to shareholder wealth, they are of considerable interest to investors. 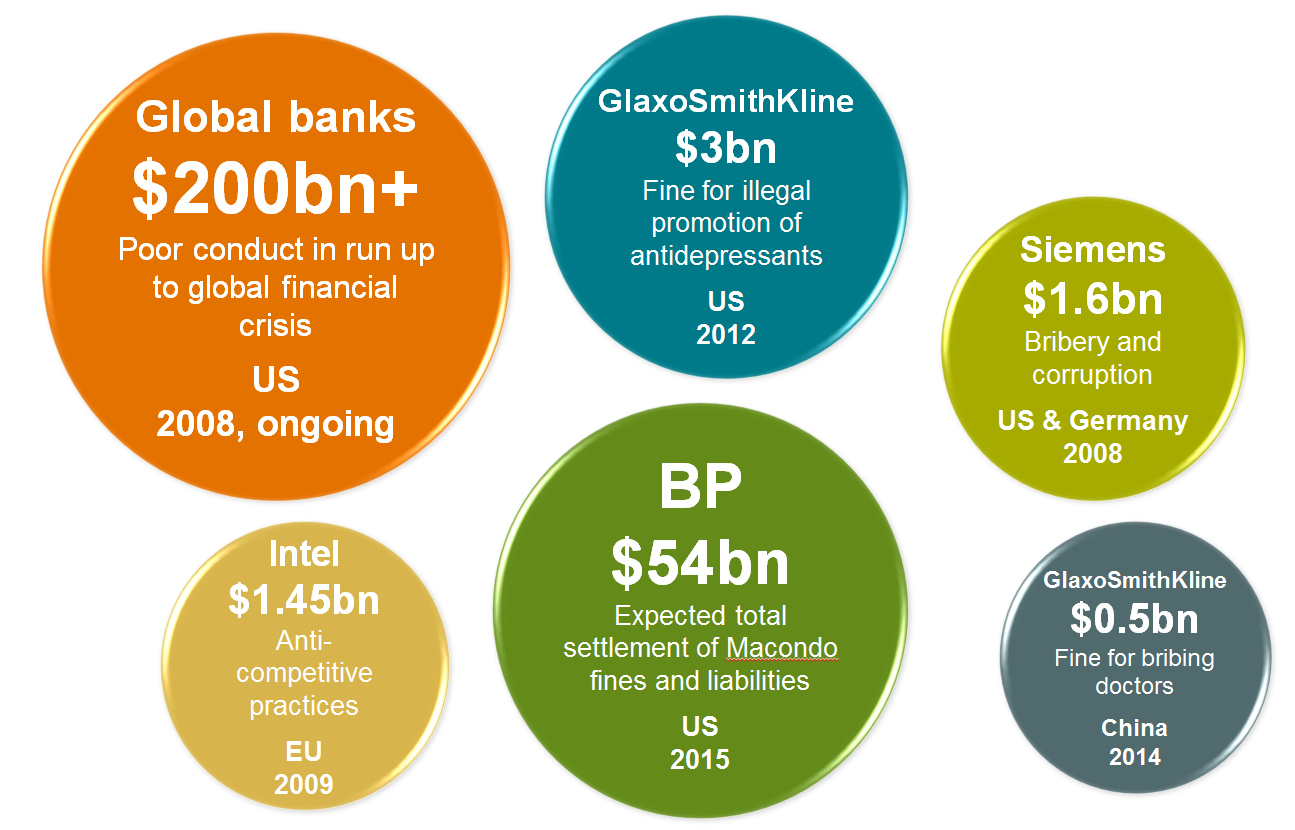 As you can see, the reach of state intervention extends to a number of industries. There are certainly lessons to be learned from each, so I invited a number of our global research analysts to present to the group. Here I’d like to share with you some of the key points our analysts highlighted:

Barriers to entry: Onerous regulation could prove a ‘moat’ to incumbents
In the health care sector, regulation is integral to patient safety and product quality. It can also act as a highly effective barrier to entry, for example in Japan, where high quality standards limit access to the market, therefore favouring domestic companies. As skills and expertise in negotiating the complex regulatory environment can be a big advantage, this is an area we like to focus on in company meetings.

Fines: Heed governments looking for revenues
Consider South African telecommunications operator MTN’s $5.2bn fine (seemingly out of the blue) from the Nigerian government for failing to disconnect unregistered subscribers by a deadline. Perhaps it was no coincidence that Nigeria had recently announced a huge deficit as a result of the plummeting oil price. It seems that MTN, perceived as big, rich and foreign, may have been an easy target.

Litigation: What is ‘fair’ counts for nothing
Post financial-crisis litigation demonstrates that governments/regulators may impose fines on the basis of what entities can afford, not what is fair. In most cases, we suggest they have waited until banks have recovered financially before pursuing litigation, in order to allow maximisation of financial settlements.

Diversification: Be wary of firms exposed to only one market where regulatory changes can be very disruptive
Excise taxes on tobacco are an attractive way for governments worldwide to raise revenues. Tobacco firms tend to lobby for gradual multi-year tax rises, which are easier for consumers to swallow. However, occasionally, governments decide on a very big tax jump. This happened in the Philippines, where the government implemented a poorly managed 84% tax increase in 2013. The largest operator, Fortune (foreign-owned, but very reliant on the Philippines), raised prices in line with taxes, but the local manufacturer Mighty did not play by the rules, gaining a huge amount of market share and destroying Fortune’s profitability for more than a year. It took months of high-level lobbying and a major local-press campaign for the industry to be correctly policed.

Management knowledge: Skill in navigating regulatory change can be key competitive advantage
We look for managers who are on top of the regulatory environment. One of the companies we know and respect manages regulatory change particularly well; before a regulatory decision is announced, it plans for all outcomes, and has a press statement prepared.

Matt is a portfolio manager on our multi-asset and Real Return teams.